Six people were killed and another four injured when a landslide engulfed three workers dormitories at the Xinxin Coalmine in Fuyuan County in southern Yunnan Province, China, at about 8.00 am local time on Tuesday 2 July 2013 (midnight between 1 and 2 July, GMT). It is unclear if the mine workings contributed to the cause of the landslide, but the area had suffrered extremely heavy rains overnight, associated with the arrival of Tropical Storm Rumbia on the south Chinese coast at about 5.30 am local time (9.30 pm on Monday, GMT) 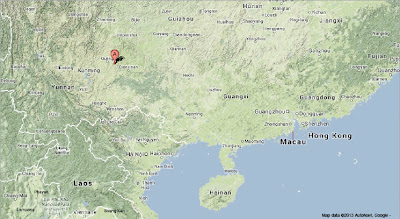 The location of the Xinxin Coal Mine. Google Maps.


Landslides are a common problem after severe weather events, as excess pore water pressure can overcome cohesion in soil and sediments, allowing them to flow like liquids. Approximately 90% of all landslides are caused by heavy rainfall. The township of Mohong, where the Xinxin Coal Mine is located, recorded 109.5 mm of rainfall overnight. Rumbia has caused widespread disruption across southwest China, with localized flooding and delays on transport networks, particularly railways and ferries, but no other fatalities have been attributed to the storm.