Seven killed by landslide in Uttarakhand.

Seven people were killed when a landslide hit two houses early in the morning of Wednesday 10 July 2013, following the heaviest monsoon rains in eighty years. The incident happened at Bhikona Village in the Chamoli district, and it is said the dead include two women and three children. Landslides are a common problem after severe weather events, as excess pore water pressure can overcome cohesion in soil and sediments, allowing them to flow like liquids. Approximately 90% of all landslides are caused by heavy rainfall. 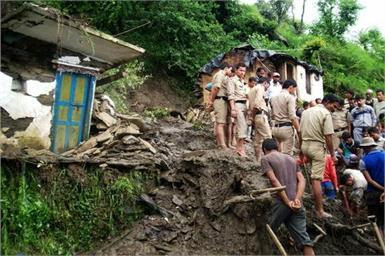 
Utterkhand has suffered extensive flooding since the onset of the Monsoon Season in June, with around 800 confirmed deaths and over 4000 people still missing. Thousands of tourists and pilgrims were trapped by flash flooding towards the end of the month and are still being evacuated by the Indian Army using helicopters. Many bridges have been destroyed, whole villages swept away and towns inundated with water. 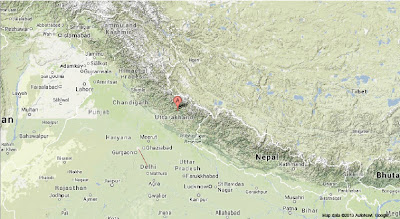 The approximate location of the 10 July 2013 Bikona landslide. Google Maps.