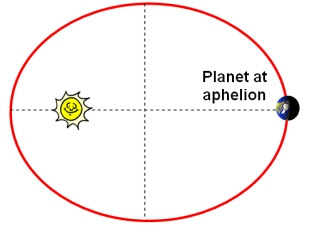 Very simple diagram of the Earth at its aphelion (not to scale). Swinburne University of Technology.

In fact the Earth could potentially move quite a bit in its orbit and still maintain an equitable climate, possibly even if it was as far out as Mars (1.5 AU), though presumably this would be somewhat cooler. Mars is a frozen wasteland largely because it is small and airless. The Earth, being larger, is able to sustain a thicker gaseous atmosphere, leading to a greenhouse effect that keeps the planet warm. Probes on the Red Planet have found abundant geological indicators of running water on the surface, suggesting that ancient Mars had a thicker atmosphere which could support liquid water, but this has now gone, the low gravity of the planet having let it escape molecule by molecule.

See also The Lunar Perigee, The Northern Solstice, The March Equinox, The Earth approaches its perihelion and The Southern Solstice.