Strange bedfellows in an Early Triassic burrow from the Karoo.

The Early Triassic Karoo Basin contain numerous preserved burrows of small Tetrapods, interpreted as adaptations to a harsh, seasonally dry, climate. These burrows are commonly preserved as casts, formed when the burrow was infilled with sediment different to the surrounding matrix, typically during flood events, and these casts sometimes contain the preserved remains of the animals that lived in the burrows.

In a paper published in the journal PLoS One on 21 June 2013, a team of scientists led by Vincent Fernandez of the Evolutionary Studies Institute at the University of the Witwatersrand describe the results of an examination of one such burrow cast, collected from the lower Lystrosaurus Assemblage Zone on Admiralty Estates at the base of Oliviershoek Pass in KwaZulu Natal Province, South Africa, at the European Synchrotron Radiation Facility, where it was possible to create a three dimensional computer model of the contents of the cast without breaking it open.

The burrow cast contains two preserved animals from completely different groups, a Cynodont ('Mammal-like Reptile'), Thrinaxodon liorhinus, and a Rhinesuchid Amphibian, Broomistega putterilli. Both skeletons are articulated, suggesting that neither was being predated by the other at the time of death (predation generally involves dismembering the prey animal). The Amphibian shows damage to several ribs, as well as a bite mark on the skull, however the ribs show signs of healing prior to death and the bite-make is inconsistent with the dentition of the Cynodont. 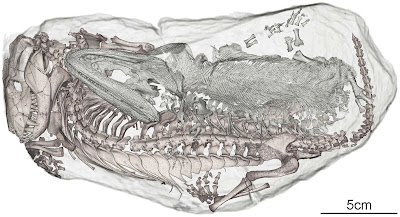 Upper-side 3D rendering of the content inside the burrow cast in semi-transparency. Thrinaxodon liorhinus (in brown) is lying on its ventral side; Broomistega putterilli (in grey) deposited upside down on the right side of the Thrinaxodon. Fernandez et al. (2013).

The two animals are preserved in a position that almost suggests they are hugging, but Fernandez et al. suggest this is probably a post-mortem positioning; the burrow filled with water in a flood event drowning the animals, and almost certainly repositioning them, though since the burrow has a narrow entrance it is unlikely that either animal was washed into it. They suggest that the burrow was dug by the Cynodont, as the Amphibian seems poorly adapted to the task and Cynodonts are well documented in similar burrows. They further suggest that the Amphibian entered the burrow after sustaining its injuries, possibly to escape from a predator, and that the Cynodont tolerated this presence, possibly because it was aestivating (dormant, hibernating). This leads them to suggest that the Cynodont may have become dormant during the driest part of the year, and that both animals died as a result of flash flooding at the onset of the rainy season.