A new species of early Ant from Cretaceous Burmese amber.

Ants are among the most widespread and abundant of Insect groups, with over 13 000 described species. They play a major role in the shaping of modern ecosystems and landscapes, and many other species of animals, plants and even fungi have commensual relationships with Ant species and could not survive without them. Ants become common inclusions in amber from the Miocene onwards, suggesting they underwent a successful adaptive radiation at this time, but earlier Ants are poorly understood. Ants are believed to have derived from Wasp ancestors between 115 and 135 million years ago, although the oldest Ant fossils are only around 100 million years old, and these are rare.

In a paper published in the journal Zootaxa on 24 June 2013, Phillip Barden and David Grimaldi of the Division of Invertebrate Zoology and Richard Gilder Graduate School at the American Museum of Natural History, describe a new species of Ant from a specimen preserved in 99 million year old amber from Kachin State in northern Myanmar.

The new species is named Zigrasimecia tonsora, where 'Zigrasimecia' means Zigras' Ant, after James Zigras, who provided the specimen from which the species is described, and 'tonsora' means barber-mouthed, in reference to the hairs around the Ants mouth.

Zigrasimecia tonsora is described from a single female specimen, lacking wings. The specimen is about 3 mm long, with a flattened head, am arrangement of setae around the mouth unlike anything seen in modern ants, short antennae and a sting. It is, however, similar to other Cretaceous Ants, notably Sphecomyrmodes, from the same location as Zigrasimecia tonsora, and therefore presumably of the same age, and Gerontoformica, about 100 million years old and from France. Barden and Grimaldi suggest that this morphology may imply that these Cretaceous Ants had a lifestyle different from, and not seen in, modern Ants. 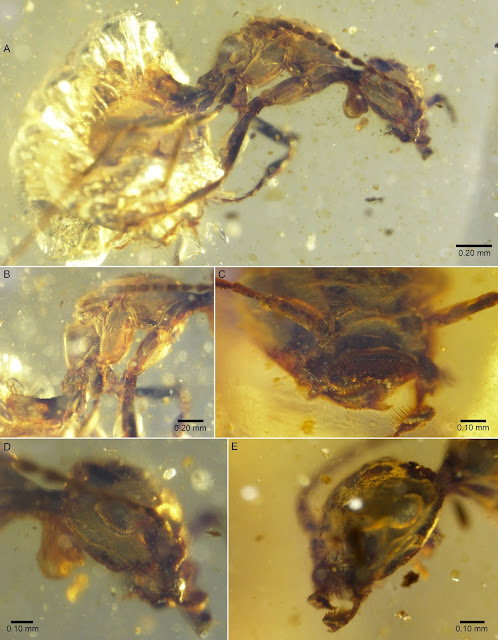 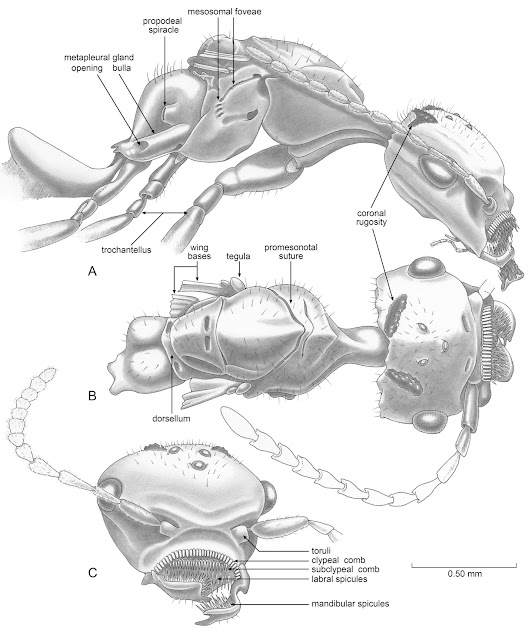 See also Three new species of Ant-mimicking Mirid Bugs from central Thailand, A new genus of fossil and extant long-legged Ants from the western Caribbean, The taxonomic implications of host preference in Large Blue Butterflies, How a Marsh Pitcher Plant catches its diner and Four new species of Leafhopper from Southern Africa.