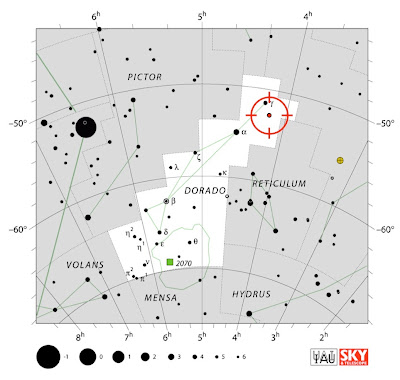 In a paper published in the journal Astronomy & Astrophysics on 10 June 2013, and on the online arXiv database at Cornell University Library on 7 June 2013, Mikko Tuomi of the Centre for Astrophysics Research at the University of Hertfordshire and the Tuorla Observatory at the Department of Physics and Astronomy at the University of Turku and Guillem Anglada-Escudé of the Institut für Astrophysik at Universität Göttingen discuss the results of a study of Gliese 163 using data from the High Accuracy Radial velocity Planet Searcher (HARPS) spectrograph at La Silla Observatory in Chile.

The study used the Doppler Method to look for planet sized bodies in the system. Planets exert a gravitational pull on the the stars they orbit, which in the case of smaller stars can be enough to make the stars wobble detectably. Astronomers look for variations in the apparent frequency of light produced due to the star moving slightly to-and-fro relative to us, and use these to calculate the presence, period and mass of any planets.

From this data Toumi & Anglada-Escudé conclude that the Gleise 163 system has at least three planets, with the possibility of a fourth.

The first of these, Gliese 163b (when naming bodies in other star systems stars are given a upper case letter, in this case Gliese 163A, and planets lower case letters, in this case Gliese 163b, 163c, 163d and possibly 164e), has a mass at least 9.9 times that of the Earth (larger than an of the inner four planets of our Solar System, but smaller than any of the outer four planets) and an orbital period of 8.63 days, from which Toumi & Anglada-Escudé calculate it orbits at a distance of 0.061 AU (i.e. 6.1% of 1 AU, the distance at which the Earth orbits the Sun).

The second planet, Gliese 163c, has a mass at least 8.7 times that of the Earth and an orbital period of 25.6 days, from which Toumi & Anglada-Escudé calculate it orbits at a distance of 0.126 AU. This is closer to Gliese 163A than Mercury is to our Sun, but as Gliese 163A is a smaller cooler star, potentially within its habitable zone (the zone within which a planet could have liquid water, and therefore life), which Toumi & Anglada-Escudé calculate to extend from 0.123 AU to 0.275 AU. Gliese 163c is is unlikely to be an Earth-like world, due to its high mass, but is clearly interesting and worthy of further study. 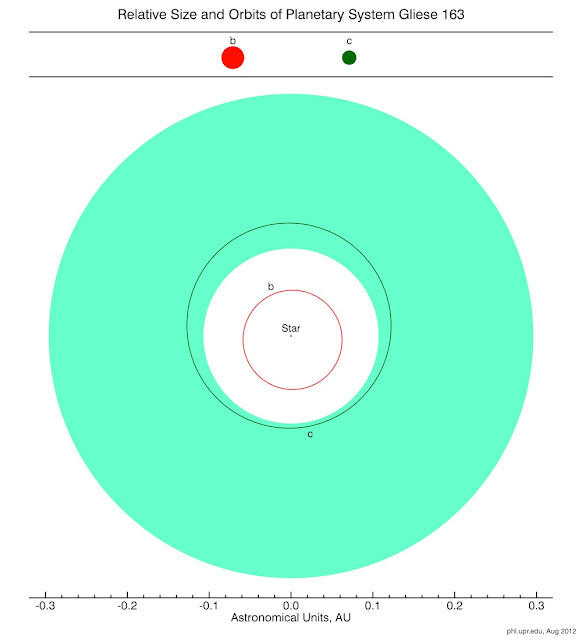 Model of the Gliese 163 system showing the orbits of the two innermost planets and the calculated area of the habitable zone. Planetary Habitability Laboratory.

The third confirmed planet, Gliese 163d, has a mass of at least 27 times that of Earth (considerably larger than Uranus or Neptune, but considerably smaller than Saturn or Jupiter), and an orbital period of 572 days, from which Toumi & Anglada-Escudé calculate it orbits at a distance of 1.00 AU, the same distance at which the Earth orbits the Sun (though outside the habitable zone of the smaller Gliese 163A).

Finally, the potential fourth planet, Gliese 163e, is calculated to have a mass 14 times that of the Earth (if it exists) and an orbital period of 125 days, from which Toumi & Anglada-Escudé calculate it orbits at a distance of 0.361 AU (inside the orbit of Gliese 163d).


See also The clear skies of GJ3470b, The atmosphere of GJ 1214b, Kepler 69c; a Super Venus rather than a Super Earth? Questioning the possible planet of Alpha Centauri and The planets of NN Serpentis.