Magnitude 6.0 Earthquake to the northwest of Puerto Rico.

The United States Geological Survey recorded a Magnitude 6.0 Earthquake at a depth of 10.0 km roughly 69 km northwest of Puerto RIco, slightly after 11.20 pm local time on Monday 24 September 2019 (slightly after 3.20 am on Tuesday 24 September GMT). There are no reports of any casualties or serious damage, though the quake was felt across Peurto Rico and the Dominican Republic. 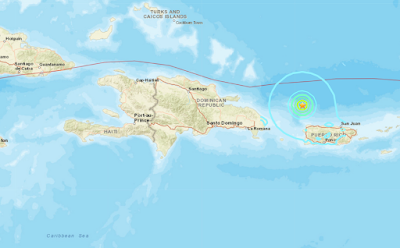 The approximate location of the 18 August 2017 Puerto Rico Earthquake. USGS.

Puerto Rico is located at the northeastern fringe of the Caribbean Tectonic Plate. The Atlantic Plate (strictly speaking, an extension of the South American Plate which runs to the northeast of the Caribbean) is being subducted beneath this. The subduction of the Atlantic Plate beneath the Caribbean Plate is not a smooth process, with the two plates constantly sticking together then breaking apart as the tectonic pressure builds up, causing Earthquakes in the process, though since the boundary between the two plates is some way to the north and east of the islands, Earthquakes in this area tend to be both deep and offshore, which lessens their destructive potential.

The subduction of the Atlantic Plate beneath the Caribbean Plate fuels the volcanoes of the Lesser Antilles Volcanic Arc. George Pararas-Carayannis.
Witness accounts of quakes can help geologists to understand these events and the rock structures that cause them. If you felt this quake (or if you were in the area but did not, which is also useful information) you can report it to the USGS here.
See also... 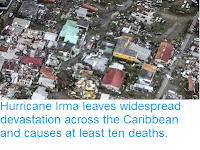 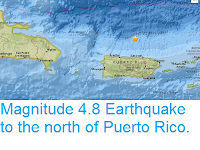