Harvestmen, Opiliones, represent an ancient and morphologically diverse lineage of Arachnids and probably were among the first terrestrial Animals. Over 6600 living species have been described to date from across the world, highlighting their status as one of the most successful Arachnid orders. Opiliones exhibit a wide diversity of body plans but most species, at least in the northern hemisphere, can be recognised by a rounded body with a fused prosoma and opisthosoma, and very long legs that gave these charismatic Arachnids their name in many of the world’s languages. Unlike other Arachnids, Harvestmen produce a repugnatorial substance from their prosomatic glands, lack book lungs, have tracheae opening on the genital area, feed by ingesting their food whole without the use of pre-oral digestion, and most taxa transfer spermatozoa through an eversible penis that can be extended by specialised protractor muscles or haemolymph pressure. They are an important component of virtually all terrestrial biomes inhabiting spaces under rocks and in bark, dense vegetation, soil, leaf litter, and even subterrestrial habitats such as caves. Most species are generalist predators and scavengers feeding on other Arthropods, Vertebrate carcasses, Fungi, and fruit. The fossil record of Opiliones is very sparse with only a handful of extinct species known since the Palaeozoic. The exceptional rarity of Harvestmen fossils may be in part due to their terrestrial lifestyle and delicate bodies with a poorly mineralised exoskeleton. Consequently, most fossil species are known from various Cainozoic amber deposits. Only seven Palaeozoic Opiliones have been described to date and, with the exception of one species, all originate from the Carboniferous Coal Measures. The earliest known Harvestman, Eophalangium sheari, was described based on remarkably well-preserved fragments of three individuals in Lower Devonian Rhynie Chert. These fossils preserve the oldest Arthropod trachea which indicate that Eophalangium sheari lived on land. Given the strikingly modern body plan of Devonian and Carboniferous Opiliones, it has been suggested that Harvestmen may have originated in the Silurian or even earlier. Recent calibrated phylogenies placed the origin of Opiliones into the Silurian (about 425 million years ago) or even as far back as the Ordovician (470–420 million years ago).

In a paper published in the Bulletin of Geosciences on 25 July 2020, Erik Tihelka of the Department of Animal Science at Hartpury College, Li Tian of the State Key Laboratory of Biogeology and Environmental Geology at the China University of Geosciences, and Chenyang Cai of the State Key Laboratory of Palaeobiology and Stratigraphy at the Nanjing Institute of Geology and Palaeontology, and the Center for Excellence in Life and Paleoenvironment of the Chinese Academy of Sciences, describe a second species of Harvestman from the Early Devonian Rhynie Chert. 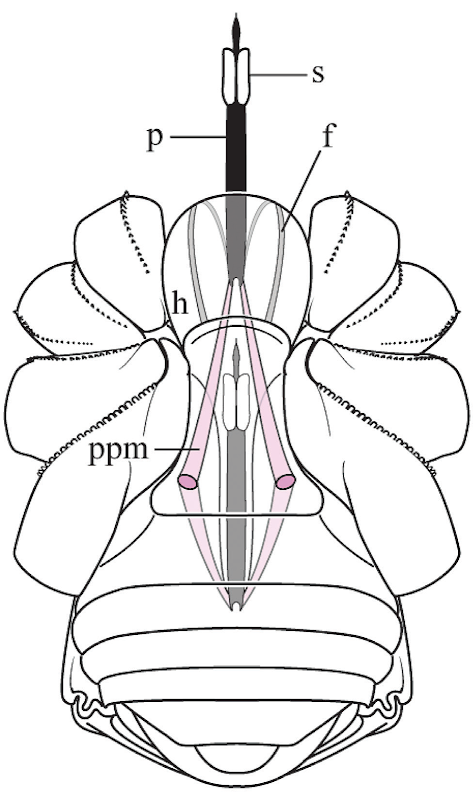 The Rhynie Chert Lagerstätte is an exceptional Early Devonian deposit of world-wide significance that preserves probably the oldest terrestrial ecosystem. In addition to its age, many Rhynie chert fossils exhibit an extraordinary level of detail including soft tissue preservation down to the cellular level, offering a unique insight into the morphology and palaeoecology of the earliest organisms to colonise land. The cherts originate from near the village of Rhynie in Aberdeenshire, Scotland and a second unit known as Windyfield Chert is located within a kilometre distance. Radiometric analyses indicate that the chert formed approximately 407 million years ago, a finding consistent with palynomorph evidence. The organisms were preserved by silica-rich waters in the proximity of ancient hot springs. Rhynie palaeoenvironment surrounding the hot springs has been characterised as an 'alluvial plain with shallow ephemeral pools which bordered a river'. The Rhynie Chert was discovered more than a hundred years ago, and since then has yielded diverse Bacteria, Algae, Fungi, Plants, and Animals including the earliest Nematodes and Mites, and the earliest fossil record of herbivory and fungal symbiosis.

While the specimen is fragmentary, most named Rhynie Arthropods, including Rhyniognatha, are likewise known only from incomplete specimens, which is somewhat unavoidable given the nature of the chert. In each case, a formal taxon name is practical for separating the specimens from other clearly morphologically distinct individuals. Because the fossil clearly differs from the previously described Eophalangium sheari, Tihelka et al. choose to propose a new formal taxon name.

Penis slender, lanceolate, not curved, 0.47 mm long and 0.05 mm wide at broadest point. The basal part of the penis consists of a slender truncus (length 3.39 mm, width 0.01 mm) narrowest apically and attached medially to the sheath by a thin expansion, then equally wide. The truncus is sclerotised basally. A darkened band present anteromedially is herein interpreted as a tendon. The apical part of the penis is lanceolate, the glans narrows sharply towards the apex. The apex is darkened, most likely indicating sclerotization, similarly to modern Harvestmen.

An indeterminate bundled structure is present to the left of the penis sheath. An approximately semi-circular structure is also present above the penis. It is unlikely that this structure represents muscle tissue associated with the penis as Rhynie Chert only preserves cuticle-lined structures such as appendages, tendons, lungs, and trachea. It is more probable that these fragments represent the remains of the Arachnid’s body wall sectioned during the preparation of the specimen or perhaps muscle insertion plaques that were involved in movement of the legs.

The cylindrical elongate structure preserved on slide Db7365 and consisting of a wider basal part and a narrower apical part connected by a narrow joint is interpreted by Tihelka et al.  as an Opilione penis and penis sheath. The structure of the Harvestmen penis is rather unique among Arthropods and no other Arachnid possesses a similar reproductive organ. The specimen clearly does not represent an Opilione ovipositor, as these tend to be apically bifurcate and those in Cyphophthalmi and the majority of Eupnoi are composed of segment-like rings. The specimen likewise is not a limb as indicated by the
characteristic glans and narrow joint connecting the sheath and the penis. A potentially significant feature of Devonopilio hutchinsoni is the basally very thin penis which appears to be rare in Opiliones. The specimen can be easily differentiated from the penis of Eophalangium sheari, the only other Devonian Harvestmen, by the truncus slender and equally wide throughout, the presence of a single penis tendon, and apex with an acute lateral expansion, lending it a spearlike appearance.

The penis of Devonopilio hutchinsoni is clearly divided into a truncus and a glans. This suggests that it could not have belonged to a member of Cyphophthalmi as these Harvestmen have an undivided spermatopositor. The penis also has a darkened anteromedial portion which likely represents a tendon. This would further exclude Troguloidea, which have a penis with two muscles; Laniatores, Gonyleptoidea and Oncopodoidea have a hydraulic-operated glans and completely lack male genital musculature. A single penis tendon is present in the extant superfamilies Ischyropsalidoidea, Phalangioidea, and Travunioidea. The precise affinity of Devonopilio hutchinsoni with any of these taxa cannot be affirmed until other more informative body remains are discovered in the future. As such, Devonopilio hutchinsoni is provisionally treated as Opiliones incertae sedis. However, the penis morphology suggests that Devonopilio hutchinsoni and Eophalangium sheari were not closely related and would be placed into two different superfamilies if they were treated as extant taxa. As such, the erection of a new genus for the present fossil is clearly justified. The wide disparity in penis morphologies in the only two known Early Devonian Harvestmen suggests that the order began to diversify well before this time.

The Chelicerata probably originated in the Cambrian as a group of aquatic Arthropods, perhaps similar to modern Sea Spiders and Horseshoe Crabs. In basal Chelicerates, reproduction likely took place externally as is the case in modern marine Arachnids. In extant terrestrial Scorpions and Pseudoscorpions a fertilisation is also achieved by the male laying a spermatophore on the substrate. The discovery of preserved intromittent organs in Rhynie chert Opiliones suggests that harvestmen in the Early Devonian were capable of internal fertilization on land without the need to lay spermatophores in water or on the substrate, implying that they were terrestrial.

Some recent Harvestmen employ a 'solicitous' mating strategy whereby the distal portion of the penis bears a sac that delivers a nuptial gift to the female’s mouth prior to copulation. The precise role of this behaviour is unknown, but the female appears to feed on the nuptial secretion and in some cases rejects the male by running away after feeding on the substance. In contrary, Harvestmen employing 'antagonistic' mating strategies evolved penises without nuptial gift sacs and apparently penetrate the females by force. Correspondingly, females of these 'antagonistic' species often possess sclerotized pregenital defences. A phylogenetic analysis of Leiobunine Harvestmen showed that the presence of a sac is the ancestral condition in this lineage. Devonopilio hutchinsoni lacks a penile sac suggesting that a nuptial gift was probably not delivered to the female, but given our still very incomplete understanding of Harvestmen reproductive behaviours inferences for this extinct species are difficult to make.

Alongside Eophalangium sheari, Devonopilio hutchinsoni, from the 407-million-year-old Rhynie chert from Aberdeenshire, Scotland, is the oldest Harvestmen in the fossil record. Tihelka et al.'s study thus adds a second Harvestman to the Rhynie Chert fauna, indicating that at least two reproductively isolated Harvestman species co-occurred in the Rhynie hot spring palaeoenvironment in a relatively short geological time interval. If the two fossils were treated as modern taxa, they would be placed into two different superfamilies or suborders on the basis of penis musculature. Tihelka et al.'s findings indicates a higher morphological disparity in Devonian Harvestmen than previously thought. 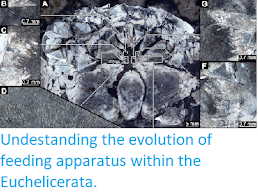 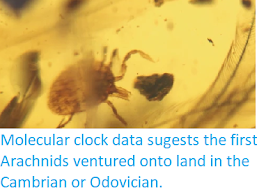 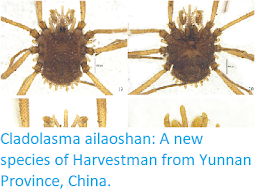 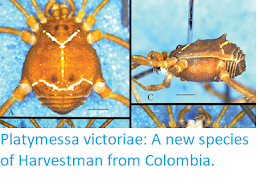 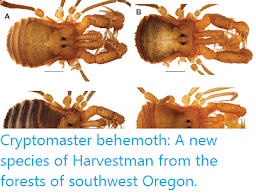 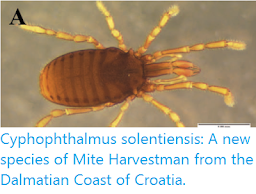