The United States Geological Survey recorded a Magnitude 5.3 Earthquake at a depth of 28 km in the Cordillera de Mérida mountain range in northwest Venezuela, slightly before 4.10 pm local time (slightly before 8.40 m GMT) on Sunday 22 November 2015. This was a large quake, and is reported to have caused damage to about 20 houses, as well as triggering several landslides, one of which caused the only fatality reported in connection with the event, the driver of a car who swerved to avoid falling rocks and collided with an oncoming SUV. A passenger in the car and two people traveling in the SUV were also injured in the event. This is the second deadly Earthquake to hit the region this month, one person having been killed in an Earthquake on Sunday 7 November. 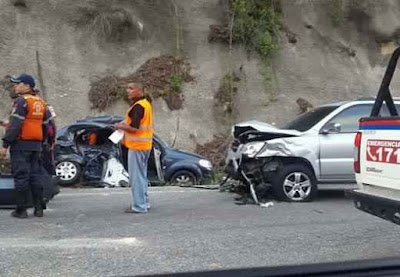 The scene of a deadly car crash caused by a landslide triggered by the 22 November 2015 Venezuelan Earthquake, Cortesía.

The Cordillera de Mérida mountains form a northeastern extension of the Andes, running through the northwest of Colombia. The mountains form the boundary between the South American Plate to the south and east and the North Andan Plate, which underlies parts of northern Colombia and northwest Venezuela, to the northwest. The North Andean Plate is caught between the west-moving South American Plate to the east and the east-moving Nazca Plate to the west, with the effect that the whole area is being crushed and uplifted, making it very prone to earthquakes. 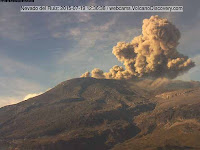 Eruptions on Nevado del Ruiz.
The Instituto Colombiano de Geología y Minería (INGEOMINAS) reported an increase in seismic activity (earthquakes) beneath Nevado del Ruiz, a 5231 m stratovolcano (cone shaped volcano made up of layers of lava and ash) in the Los Nevados National Natural Park, at the northern end of the...