Flooding and winter storms thought to have killed at least fouteen in Texas, Oklahoma and Kansas.

At least fourteen people are thought to have died as flooding and winter storms battered Texas, Oklahoma and Kansas on Friday 27 November 2015. Eight deaths have been reported in flooding in northern Texas, while four have died in road accidents associated with wet conditions in Kansas and two in Oklahoma.At least three people are thought to have died in flash floods that swept vehicles from roads in Dallas, with two further deaths in Johnson County and one in Tarrant County. All four deaths in Kansas have been described as 'single vehicle incidents'. Details of other fatalities are not available at this time. 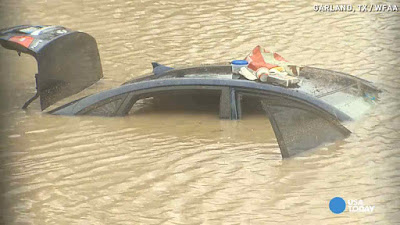 Car caught in a flash flood at Garland in Dallas, Texas. USA Today.

Many areas of Texas are facing severe disruption to transport networks as roads are closed due to flooding and many rail services have been cancelled. Flooding has also caused many businesses to close in the area; schools and government services are not reporting closures at this time, but this is largely because most are closed for the Thanksgiving Holiday anyway. Many areas are also reporting overflowing sewage systems due to the floods, which will add to clean-up costs and may lead to public health problems. In Oklahoma around 83 000 people are reported to be without power after high winds toppled trees onto power lines. 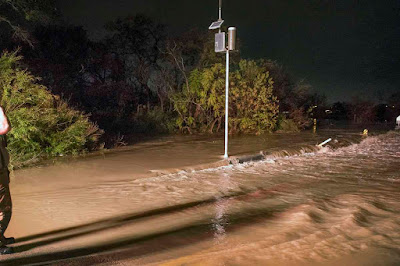 The flooding has been widely linked to the El Niño weather system currently affecting the Pacific Ocean, a phenomenon that typically brings high levels of rainfall to the southwest United States, starting around the beginning of December, although this year the area has been suffering floods since the middle of October. More specifically the flooding is likely to have been directly caused by moisture associated with Hurricane Sandra, a tropical storm which largely petered out before making landfall on the Pacific coast of Mexico, bein downgraded to a Tropical Depression on Saturday 28 November 2015, but which will nevertheless have raised the atmospheric water content severely. The relationship between the two events is difficult to determine; more tropical storms would be expected in the east Pacific late in the year during El Niño periods, but it is not possible to say that any particular storm was directly caused by the weather pattern. 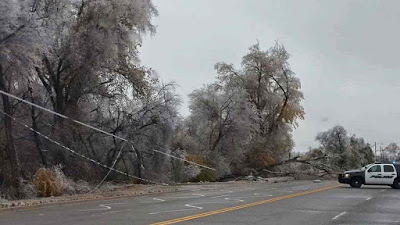 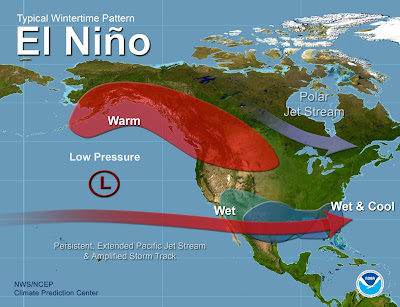 Tropical storms are caused by the warming effect of the Sun over tropical seas. As the air warms it expands, causing a drop in air pressure, and rises, causing air from outside the area to rush in to replace it. If this happens over a sufficiently wide area then the inrushing winds will be affected by centrifugal forces caused by the Earth's rotation (the Coriolis effect). This means that winds will be deflected clockwise in the northern hemisphere and anti-clockwise in the southern hemisphere, eventually creating a large, rotating Tropical Storm. They have different names in different parts of the world, with those in the northwest Atlantic and northeast Pacific being referred to as hurricanes. 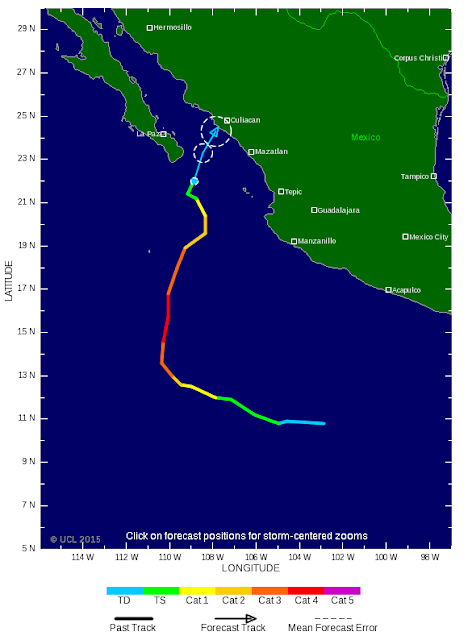 Hurricane Patricia: The most severe storm ever recorded causes widespread flooding but relatively few casualties.                   Hurricane Patricia formed as a tropical depression over the eastern Pacific Basin in mid-October 2015, before increasing rapidly in intensity on 22 October...