Probrachylophosaurus bergei: A new species of Brachylophosaurin Hadrosaur from the Late Cretaceous of northern Montana.

Hadrosaurs were large, herbivorous Ornithischian Dinosaurs, commonly referred to as 'Duck-billed Dinosaurs', which dominated many Dinosaur faunas in the Late Cretaceous of North America. They were split into two groups, the solid-crested Hadrosaurines and the hollow-crested Lambeosaurines, with the Hadrosaurines appearing slightly earlier and dominating earlier faunas and the Lambeosaurines appearing slightly later then slowly rising to prominence. The Brachylophosaurins were a small, but locally abundant, group of Hadrosaurine Dinosaurs known from the Campanian (83.6 to 72.1 million years ago) of Montana and Alberta in North America. There are three described species, Acristavus gagslarsoni, which lacked a crest and which is known only from the lower part of the Two Medicine Formation of Montana, making it about 81.4 million years old, and two later crested forms, Brachylophosaurus canadensis, known from the Oldman Formation of Albeta and the Judith River Formation of Montana with all specimens thought to be at least 77.76 million years old, and Maiasaura peeblesorum, known from the upper part of the Two Medicine Formation, and thought to be about 76.66 million years old.

In a paper published in the journal PLoS One on 11 November 2015, Elizabeth Freedman Fowler and John Horner of the Museum of the Rockies and the Department of Earth Sciences at Montana State University describe a new species of Brachylophosaurin Hadrosaur from the Kennedy Coulee exposure of the Judith River Formation in Hill County in northern Montana.

The new species is described from a single disarticulated but almost complete specimen from Kennedy Coulee, though a second fragmentary subadult specimen is also referred to. It is named Probrachylophosaurus bergei, where 'Probrachylophosaurus' means 'before Brachylophosaurus' (Brachylophosaurus itself means 'short-crested Lizard'), as was found in deposits earlier than any of those which have produced specimes of Brachylophosaurus, and may be ancestral to that species, and 'bergei' honours the late Sam Berge, co-cowner of the land where the specimen was found. The post-cranial skeleton was discovered in 1981 by Kyoko Kishi and subsequently excavated by a University of California Museumof Paleontology team led by Mark Goodwin between 1981 and 1984. The skull was discovered in 2007 and subsequently excavated by a Museum of the Rockies team, in 2007-8, with the California Museum of Paleontology material subsequently being donated to the Museum of the Rockies. 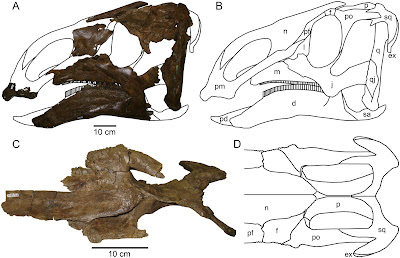 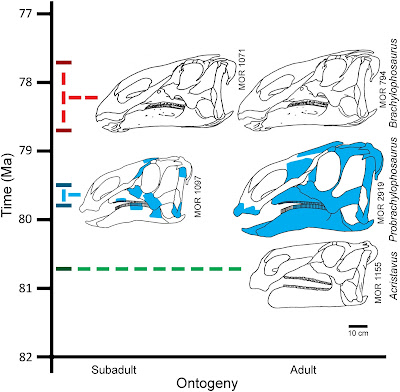 The left tibia of the specimen was sectioned to determine the age of the specimen. Many Dinosaurs show lines of arrested growth on their long bones, similar to the rings of trees, caused by seasonality of the climate when they were living, having a good growth season and a poor one (probably either a cold season or a dry one, depending on where the species lived). Unlike modern Mammals and Birds, most non-Avian Dinosaurs continued to grow throughout their lives, with a rapid-growth early juvenile period followed by a longer adulthood in which growth was much slower.

The tibia of Probrachylophosaurus bergei shows fourteen lines of growth, indicating that it was fourteen years old when it died. The outermost four of these growth lines are closely spaced, indicating that the individual reached maturity at about ten years of age. Two of the juvenile years, six and seven, show much reduced growth periods, suggesting that these years were probably much more stressful than other years, with limited access to resources. The eighth year, in contrast, appears to have been particularly mild, with intervals of growth during the non-growing season, possibly indicating a milder than usual winter. 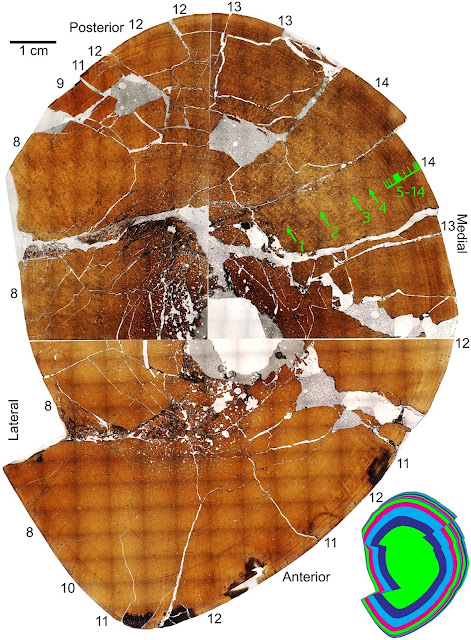 Tibial histology of MOR 2919, mid-diaphyseal cross-section. Numbered green arrows identify lines of arrested growth (LAGs). The closely spaced outer LAGs are indicated with tick marks along a green line. Numbers around the circumference of the cross-section indicate the number of LAGs preserved in that radial segment of the tibia. Note that diagenetic crushing has displaced several segments radially inward. Thumbnail image in lower right corner colors the area between each pair of LAGs to highlight locations of radial displacement as well as to indicate bone deposition between later LAGs occurring primarily along the posteromedial region. Freedman Fowler & Horner (2015).

Probrachylophosaurus bergei also shows a number of pathologies (old injuries dating to before the time of death). Both dentaries (lower jaw bones) show circular depressions surrounded by rings of raised growth. Six of the tail vertebrae signs of damage and subsequent healing, and since these come from an incomplete section of the skeleton other, missing vertebrae may have also been damaged. The metatarsals (foot bones), tibia and fibia also show signs of old injuries. These pathologies will be the subject of a future study. 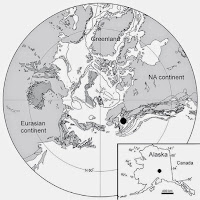 A Hadrosaurid Dinosaur trackway from the Denali National Park in Alaska.
The preserved tracks of ancient animals such as Dinosaurs can provide insights into their lifestyles and biology that could not be determined by examination of bones alone, although such data needs to be interpreted carefully. Such studies can potentially provide data on herding or other social...

A new species of Hadrosauroid Dinosaur from the Late Cretaceous of Shanxi Province, China.
Hadrosaurs, or Duck-Billed Dinosaurs, were large herbivorous...