541 million years ago the Cambrian Explosion produced a wide range of sophisticated bilaterally symmetrical organisms with biomineralized skeletons, which apparently all appeared more-or-less simultaneously. In contrast the Ediacaran Fauna, which is found in strata between 550 and 543 million years old in several parts of the world, comprises a number of radially symmetrical or unsymetriacl forms, including about ten biomineralized genera, which are generally thought to have been Poriferans (Sponges), Cnidarians (the group that includes modern Jellyfish, Corals and Sea Anemones) or even colonial microorganisms.

On such Ediacaran fossil is Namacalathus hermanastes, a colonial, reef-dewlling organism discovered in rocks of the Nama Group in Namibia in the 1990s and subsequently reported in the Byng Formation of the Canadian Rocky Mountains, the Birba Formation of Oman, the Kolodzha and Raiga formations of West Siberia and the Anastas’ino Formation of the Altay-Sayan Foldbelt (also Siberia). Namacalathus comprises cup-shaped, stemmed, biomineralized organisms reaching about 5 mm in height, with a hexaradial cross section and apparent budding growth pattern.

In a paper published in the journal Proceedings of the Royal SocietySeries B: Biological Sciences on 4 November 2015, Andrey Zhuravlev of the Department of Biological Evolution at the Lomonosov MoscowState University and Rachel Wood and Amelia Penny of the School of GeoSciences at the University of Edinburgh, discuss the microstructure of the biomineralized cups of a number of exceptionally well-preserved Namacalathus specimens from the Nama Group in Namibia, and discuss the implications of this microstructure for the taxonomic affiliations of Namacalathus.

Zhurayev et al. observe that the exoskeleton of Namacalathus has a triple-layered structure, with two thin inner and outer layers encasing a thicker inner layer comprising irregulatly arranged rod-like crystals. In places dolomite microcrystals have formed within this layer, suggesting that it originally comprised high-magnesium calcite. 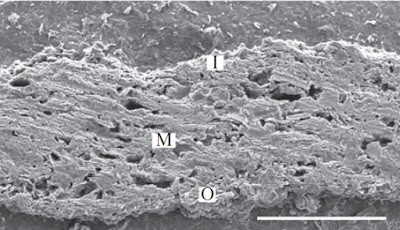 High-magnesium calcite is found in a wide range of modern and fossil organisms, including Calcareous Algae, Foraminiferans. Sponges, Corals, Annelid Worm Tubes, Molluscs, Brachiopods, Bryozoans, Tentaculitoids (Lophophorate Animals that went extinct in the Jurassic and Tommotiids (small shelly fossils from the beginning of the Cambrian). However a triple-layered laminated microstructure is much rarer, being found only in Molluscs, Brachiopods, Bryozoans, Tentaculitoids and Tommotiids.

The Namacalathus specimens also show a curious pattern of sediment infill, with the sediment around the opening at the top of the cup matching the surrounding sediment, but with sediment with s distinctive texture filling the rest of the shell. This implies a soft tissue barrier to sediment ingress, which has not been directly preserved. This is at odds with a Molluscan origin for the shell, as Molluscs tend to fill their shells, and in the case of filter feeding Molluscs (the only ecological pattern that would be expected in a shelly organism living attached to a reef structure), often have muscular syphons which extend beyond the shell. Lophophorate Animals such as Brachiopods, Bryozoans and the extinct Tentaculitoids, have a different structure, however, with a structure called a lophophore, comprising a number of tentacles used to filter food from the water in a net-like arrangement, which is often held within the shell, with water being pumped in to be strained by the lophophore.

Modern lophophorate animals are all bilaterally symmetrical, whereas Namacalathus appears to have a hexaradial symmetry, which presents a promlem for the interpretation of Namacalathus as a Lophophorate. However Namacalathus appears to have reproduced by budding, with new daughter cups growing from the parent on either side in a symmetrical arrangement. This suggests that the soft tissue of the living animal may have been arranged in a bilaterally symmetrical fashion, possibly with sex organs (or asexual reproductive organs that could potentially have later evolved into sex organs) arranged on either side.

This suggests that Namacalathus may have been a bilaterally symmetrical Lophophorate Animal living within a hexaradiate shell. This shell would have offered little protection against predators (it had six openings around its side as well as the central opening at its top) but with a triple-layered shell presumably supported by tougher organic material, would have been highly resilient to the battering associated with a high-energy environment on a reef top, while the openings in the shell allowed water to pass through and be filtered by the lophophore. The organisms formed bilaterally branching colonies with daughter cups probably sharing a common gut with the parents, a system still found in modern colonial Lophophorates, and which has been suggested as possibly linked to the origin of bilateral symmetry in animals. 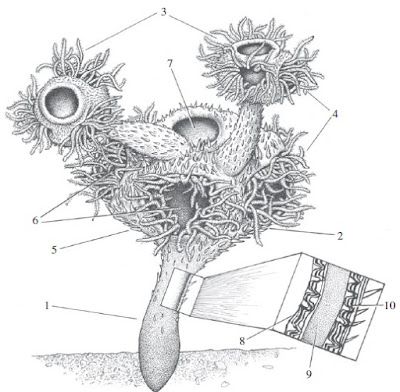 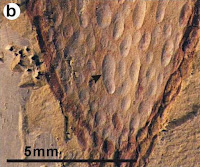 The first Entoproct?                                     The Lophotrochozoa are a diverse group of Invertebrate animals indicated to have a common ancestry by genetic analysis. The group includes the Annelida, Mollusca, Bryozoa, Cycliophora, Brachiopoda, Entoprocta and Phoronida. Within this group several groups are united by the presence of a crown of tentacles (the Lophophore) surrounding the mouth...
Follow Sciency Thoughts on Facebook.