Megafaunal extinctions in the Late Pleistocene of the Willamette Valley, Oregon.

North America hosted a large and diverse megafaunal assemblage during the Pleistocene, including Mammoths, Mastodons, Horses, Camels, Giant Armadillos and Ground Sloths, Sabre-toothed Cats, Dire Wolves and a variety of other large herbivorous and Carnivorous Mammals. However at the end of the period the majority of these animals became extinct in a very short period, an event that has fascinated palaeontologists for over a hundred years. The extinctions coincided with two other distinctive events, the arrival of the first Humans in many areas of North America, and the climatic reversal known as the Younger Dryas, in which the warming climate of the Late Pleistocene suddenly underwent an abrupt cooling, with full glacial conditions returning for a period of several centuries. Of the two events the arrival of Humans is generally considered the more likely explanation for the extinction, as the Megafauna had previously encountered a number of previous cold spells, whereas Humans were a completely novel phenomena with which the animals would not have been familiar. However in the Pacific Northwest of North America Humans are known to have co-existed with Pleistocene Megafuana for about 14 000 years before the End Pleistocene Extinction, which occurred at roughly the same time as elsewhere.

The deposits of the Willamette Valley show a distinctive series of beds associated with the Missoula Floods, in which the failure of an ice dam on a huge lake in northwestern Montana triggered flooding across much of the northwestern United States about 15 000 years ago. In the Willamette Valley these deposits form a series of beds up to 35 m thick, making them a useful and hard-to-miss geological marker. The valley is also noted for producing extensive Late Pleistocene Megafauna fossils, which have been collected since the 1840s. 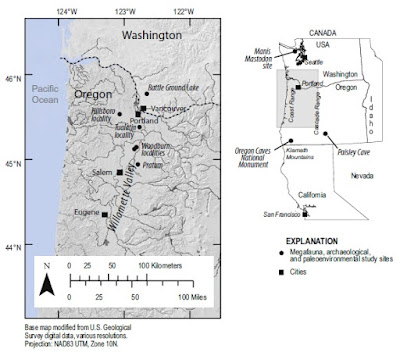 Gilmour et al. examined records and catalogues of finds at the University of Oregon Museum of Natural and Cultural History as well as contacting numerous amateur and professional collectors and associations known to have worked sites in the Willamette Valley during the last 40 years, in order to identify Megafuana specimens from bellow the Missoula Flood Beds. None of these specimens showed any signs of cutting with tools or other Human activity, nor of reworking by natural events (such as flooding), suggesting that the specimens were found at or close to the sites where they died.

They were able to locate eleven such specimens, which were then dated using radiocarbon methods, in order to determine when each individual had died; a twelfth specimen which had been dated as part of a previous study was also included. The sample included five Bison, two Mammoths, two Horses, two Giant Ground Sloths and one Mastodon. All of these except the Mastodon are thought to have been grazing species favouring open grassland with a sparse tree canopy, while Mastodons are thought to have favoured a more wooded environment.

Radiocarbon dating of the specimens yielded dates of between 15 590 and 12 560 years old, with both the oldest and youngest specimens being Bison. The Younger Dryas cooling event is generally reckoned to have begun in about 12 900 years ago and lasted about 1300 years, but this is a global average date, and the effect of climate events will be felt at different times in different parts of the world. Reconstructions of vegetation at Battle Ground Lake in Oregon, which is about 30 km north of the Portland Basin and which forms an extension of the same depression which forms the Wilamette Valley, suggests that this area had a covering of tudra or open grassland until about 14 300 years ago, when it was replaced by a mixture of grassland and open woodland. This mixed environment was itself replaced about 13 100 years ago by a more closed forest environment, which persisted till about 10 800 years ago. This wooded environment is considered to be associated with a period of cooler conditions across western Oregon, which corresponds to the global Younger Dryas Cooling Event.

Only one of the Willamette Valley specimens post-dates the replacement of warmer open terrain with cooler wooded terrain, and that only by a few hundred years, consistent with the area being somewhat to the south. This supports the idea that the cooling associated with the Younger Dryas, and subsequent vegetational changes could have been the cause of the decline of the Late Pleistocene Megafuana in the Willamette Valley. However the small size of this study is not sufficient to state this with absolute confidence, and changes in human behavior associated with a cooling climate may also have played a role in the Megafaunal Extinction.

Only a very limited amount of archaeological material has been found in the Willamette Valley; four Clovis points and two Western Stemmed points, both spear tips associated with hunting large animals, though the cultures which produced them are thought to have had a broad diet including small game and a variety of herbaceous plants. Elsewhere in the Pacific Northwest archaeological sites have yielded more evidence of Human activity, and interaction with Late Pleistocene Megafauna. The Manis on the Olympic Peninsula, which is dated to about 13 800 years ago, has yielded a Mastodon with what appears to be an embedded bone tool, while the Paisley 5 Mile Point Caves locality in Central Oregon has produced a variety of tools as well as Human coprolites, produced between 14 720 and 14 000 years ago, indicating Humans and Pleistocene Megafauna were co-existing in the area shortly after the Missoula Floods.

Late Pleistocene lithic artefacts from the Bear Creek Site on the Puget Sound.                       The earliest Human settlers are thought to have entered the Americas across the Bering Straits during the last glaciation when sea levels were...