Chiloschista pulchella: A new species of Orchid from Khammoune Province in central Laos.

Epidendroid Orchids, Epidendroideae, are the largest subfamily of Orchids, with over 15 000 described species, more than all other Orchid groups combined. The majority of these species are epiphytic (live on other plants, typically in the canopy of rainforest trees), though terrestrial forms are known. The group is found across the globe, with the exception of the polar regions, the deserts of Africa, Arabia and Australia, and the southern part of South America. The genus Chiloschista currently contains about 20 species, and is found from the Himalayas south through India and Southeast Asia to Australia and east to China and Micronesia, reaching maximum diversity in Southeast Asia, where there are nine known species found in Thailand, three in Vietnam, three in China and two in Laos.

In a paper published in the journal Taiwania on 6 November 2018, Leonid Averyanov of the Komarov Botanical Institute of the Russian Academy of Sciences, Khang Sinh Nguyen of the Institute of Ecology and Biological Resources of the Vietnam Academy of Science and Technology, and Tatiana Maisak, also of the Komarov Botanical Institute, describe a new species of Chiloschista from the Hin Nam No Nature Protected Area of Khammoune Province in central Laos.

The new species is named Chiloschista pulchella, meaning 'purple lips' in reference to its flowers, which are bright yellow, with purple margins. It is a leafless epiphytic herb, found growing on trees in a dry evergreen and semideciduous, broad-leaved forest. Each plant comprises a stem 4-12 mm in length and covered in flattened silver-green rootlets. Flowers are produced in April and May, on pendulous (dangling) racemes 6-10 cm in length. 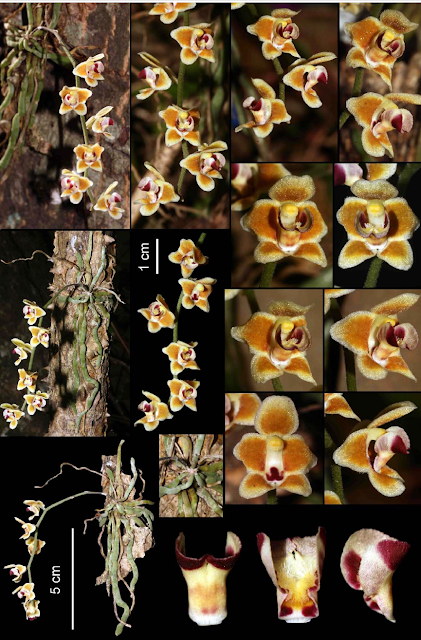 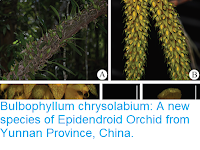 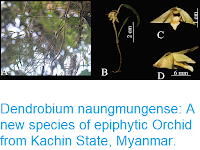 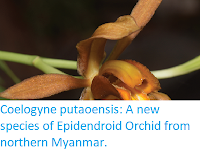