Archetingis ladinica: A Lace Bug from the Middle Triassic of the Swiss side of Monte San Giorgio.

Lace Bugs, Tingidae, are small (2-10 mm) members of the True Bug Order Hemiptera, which get their common name from the lacy pattern of the veins of their wings. They are plant parasites, with each species having a specific host, and many species are significant agricultural pests. The oldest known fossil Lace Bugs date back to the beginning of the Cretaceous, however the global distribution of the group, combined with the wides range of host plants, which includes Mosses, Conifers and Horsetails, suggests that the group was established long before the breakup of the supercontinent of Pangea in the Late Jurassic.

The Middle Triassic Monte San Giorgio Fossil-Lagerstätte outcrops on the mountain of the same name, overlooking Lake Lugano on the Swiss-Italian Border. The site is noted for the production of Marine Vertebrates of Anisian (247-242 million years ago) to Ladinian (242-247) age, for which it has been made a UNESCO World Heritage List site. However, the site does not simply preserve marine faunas, but preserves a complex paleoenvironment with a shallow lagoon with a surrounding area that contains numerous small pools and streams, connected to a marine environment with a carbonate platform. The Lower Kalkschieferzone beds on the Swiss side of the mountain have been dated to 239.51 million years ago (Early Ladinian) and have produced several Insect fossils, including Mayflies, Beetles and Bristletails. 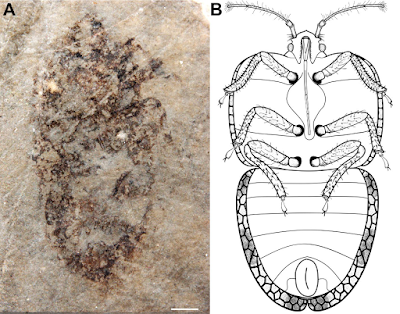 (A) Archetingis ladinica obtained by merging slab and counterslab; (B) reconstruction of Archetingis ladinica,  features not preserved in the fossil (i.e., antennae and eyes) in grey. The white scale bar corresponds to 1 mm. Drawing by Matteo Montagna. Montagna et al. (2018). 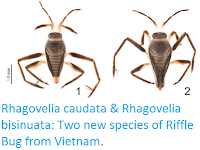 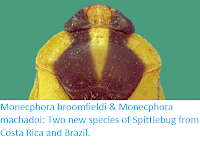 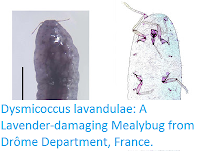