Pterosaurs from the End Cretaceous of Morocco.

Pterosaurs first appeared in the Triassic, and were the first vertebrate group to achieve powered flight, long before the appearance of Birds. They had membranous wings supported on their elongated fourth digits, and moved on all fours when on the ground. The Pterosaurs underwent a major radiation at the beginning of the Jurassic, then a second radiation at the beginning of the Cretaceous when a more advanced group of short-tailed Pterosaurs appeared and became dominant. Despite their earlier success, the group appears to have begun to decline in the Middle Cretaceous, possibly as a result of increased competition with Birds, with only a single group known from the Maastrichtian (the last six million years of the Cretaceous), the gigantic Azhdarchidae, which often weighed over 200 kg and achieved wingspans in excess of ten metres. However, this picture may be misleading, as Pterosaurs, like Birds, had fragile, hollow bones, with limited preservational potential, and most Pterosaur fossils come from fossil Lagerstätten (sites with exceptional fossil preservation), none of which is known from the last 15 million years of the Cretaceous.

In a paper published in the journal PLoS Biology on 13 March 2018, Nicholas Longrich of the Department of Biology and Biochemistry and Milner Centre for Evolution at the University of Bath, David Martill of the School of Earth and Environmental Sciences at the University of Portsmouth, and Brian Andres of the Vertebrate Paleontology Laboratory at the University of Texas at Austin, describe a diverse Pterosaur assemblage from the latest Cretaceous Ouled Abdoun Phosphate deposits of Morocco.

The Ouled Abdoun Phosphate deposits are commercially exported from a sedimentary basin to the west of the Atlas Mountains. They were laid down in a near-shore marine environment and produces numerous Marine Reptile, Pterosaur and Mammal fossils, which range from Late Cretaceous to Eocene in age. These strata have not been formally split into stratigraphic divisions by geologists, but instead have been divided into a series of couches (beds) for mining purposes, with one of these, Couche III, being dated through carbon and oxygen isotope chemostratigraphy to the last million years of the Cretaceous.

The first Pterosaur described by Longrich et al, is a new species of Pteranodontid, a group not previously recorded from after the Campanian (83.6-72.1 million years ago). It is given the name Tethydraco regalis, where 'Tethydraco' means 'Tethys Dragon', in reference to the ancient Tethys Sea, in which these deposits were laid down, and 'regalis' means 'royal'. The species is described from a left humerus, two ulnas, two femurs and a tibia. The humerus is 231 mm in length without the head, which is missing (this equates to a wingspan of about 5 m) and has a trapezoidal deltopectoral crest, considered to be a reliable indicator of a specimen belonging to the Pteranodontidae. 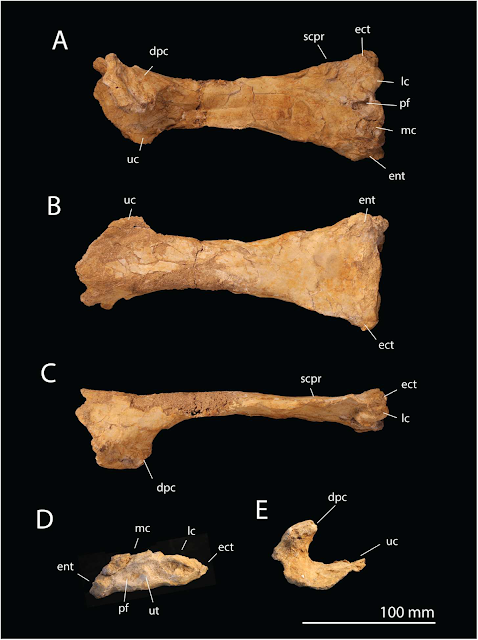 The second Pterosaur described is a small Nyctosaurid a member of a group known from earlier in the Maastrichtian, but not this close to the Cretaceous-Palaeocene boundary, and not previously from anywhere on the African continent. It is named Alcione elainus, from Alcyone of Trachis, who in Greek mythology was turned into a Kingfisher as a punishment for comparing her husband to Zeus, and  'elainus' which derives from the Greek 'elaino', meaning 'to wander'. This species is described from a partial skeleton including humerus, sternum, scapulocoracoid, and femur, with a fourth metacarpal, a mandible, a partial wing including the humerus, radius, ulna, parts of metacarpal IV and phalanx IV-1, and some other material also referred. 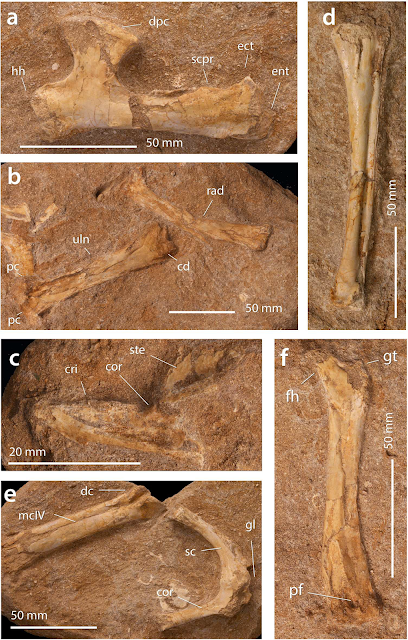 The third Pterosaur described is also a Nyctosaurid, and is named Simurghia robusta, where 'Simurghia' refers to the Simurgh, a giant mythical Bird from Persian mythology, and 'robusta' means 'robust'. This species is described from a single humerus roughly 165 mm in length, with a hatchet-shaped deltopectoral crest, a feature considered to be diagnostic of Nyctosaurids. This represents an animal 5.6 times the size of Alcione elainus, raising the posibility that this may represent an adult specimen of the same species. However, Longrich et al. reject this hypothesis on the basis that all of the specimens referred to Alcione elainus show dense, avascular surface textures on their bones, which is indicative of maturity in Pterosaurs, indicating that all of these specimens were at least close to their full size. 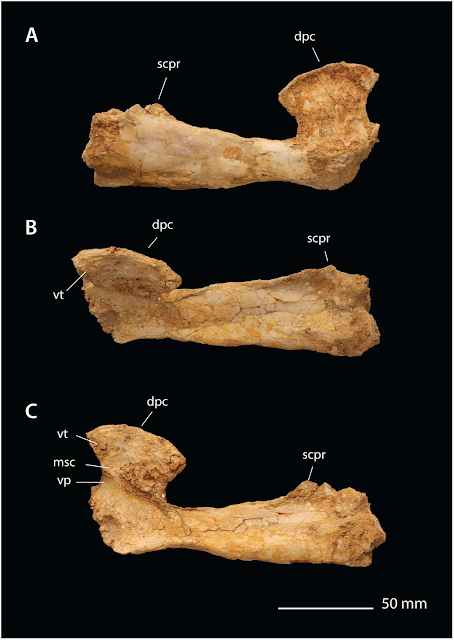 The fourth Pterosaur described is also a Nyctosaurid and is named Barbaridactylus grandis, where 'Barbaridactylus' is a combination of Barbary, as in Barbary Coast, an old name for North Africa, and 'dactylo', Greek for finger, and 'grandis' means 'great' in Latin. This species is described from twelve humeri, one with an associated left radius and ulna, right femur, left scapulocoracoid, and partial right mandible. This species has a humerus up to 225 mm in length, but more slender than that of Simurghia robusta, with a deltopectoral crest that is short, broad, and subrectangular, with a weak constriction. 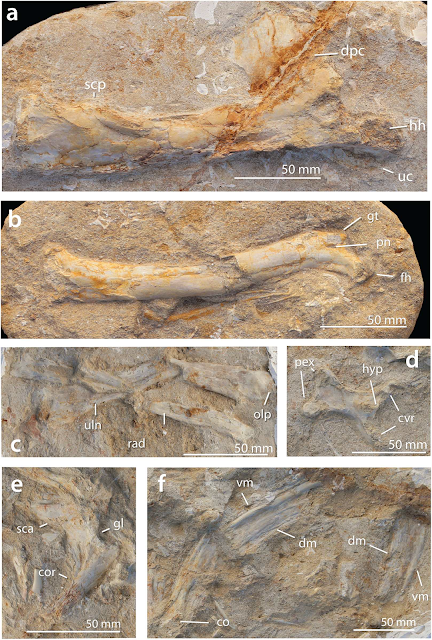 The sixth specimen described is another Azhdarchid cervical vertebrae, which Longrich et al. do not assign to a specific species, but suggest it shows some affinities to the giant Quetzalcoatlus, though it is clearly from a much smaller animal, with a total length of 153 mm. 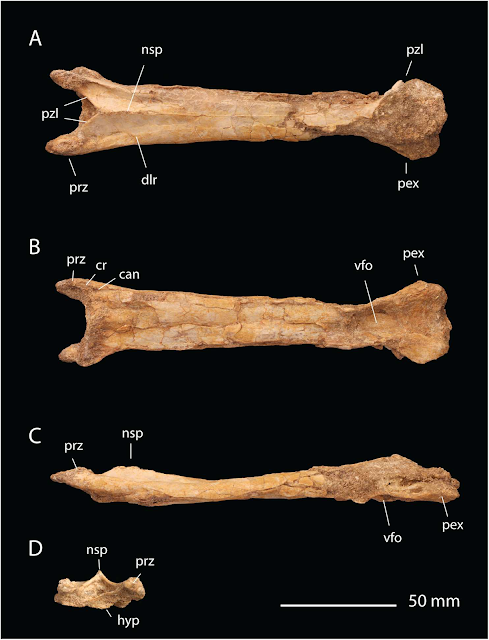 The final specimen described is another unidentified Azhdarchid, this time a fragment of ulna measuring 362 mm, with a missing proximal end (the end closest to the body), which may have measured up to 700 mm when complete, with a diameter that varies from 40 to 65 mm, indicative of a very large animal, with a wingspan of around 9 m.

Longrich et al. suggest that the discovery of Pterosaurs from three different families at the very end of the Cretaceous undermines the theory that they had been declining due to competition with Birds before the End Cretaceous Extinction Event. However, they do note that all known Late Cretaceous Pterosaurs are rather large animals, suggesting that some degree of niche partitioning was occurring at this time, with Birds occupying the small flying animal niche while Pterosaurs occupied the large flying animal niche. They suggest that in this sense, Birds could be seen as being responsible for the extinction of the Pterosaurs, since the End Cretaceous Extinction is known to have wiped out groups of large bodied animals, such as Pterosaurs or non-Avian Dinosaurs, while smaller animals, such as Birds or Mammals, scraped through. 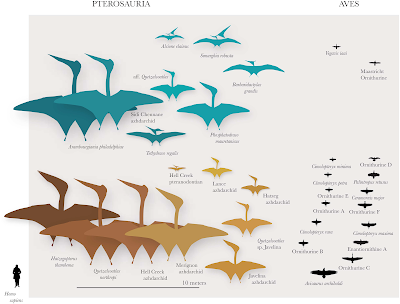 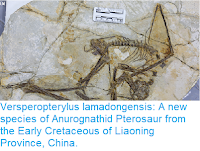 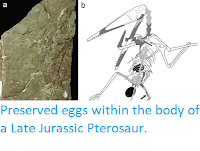 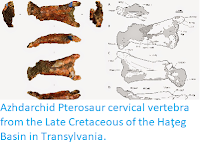 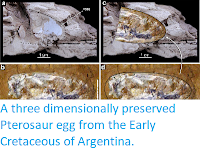