Kromtitis lluisprietoi: A new species of Dromioid Crab from the middle Eocene of Alicante Province, Spain.

Dromioid Crabs are predominantly found in the waters around Madagascar today, but have a long fossil record that suggests they were much more abundant in the past. The oldest fossil Dromioid Crabs date from the Jurassic of Europe, with the group becoming numerous and globally distributed in the Cretaceous. They remain a common fossil group in Europe until the Eocene, after which they begin to dwindle, with the latest European specimens known from the Middle Miocene of Poland.

In a paper published in the journal Palaeontologica Electronica on 2 August 2019, Àlex Ossó of Tarragona in Catalonia, Spain, describes a new species of Dromioid Crab from the middle Eocene L’Arginent outcrop of Alicante Province, Spain.

General view of l’Arginent outcrop, with the yellowish Lutetian fossiliferous levels in the foreground, and the 1406 m Puig Campana in the background. Collectors in the centre of the image for scale. Ossó (2019).

The new species is placed in the genus Kromtitis, which contains several previously described species from the European Eocene, and given the specific name lluisprietoi, in honour of the late Lluís Prieto, an enthusiastic fossil collector from Barcelona who discovered the specimen from which the species is described. It is described from a partial carapace, 14.5 mm long and 18.0 mm wide. This is markedly convex, as well as being roundish to subquadrate (nearly square), and apparently originally as long as wide. The specimen is covered with well individualised rounded tubercles peaked with coarse granules, and well defined by grooves. 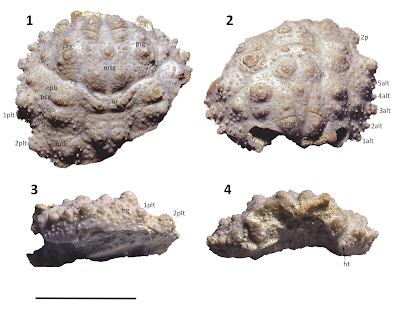 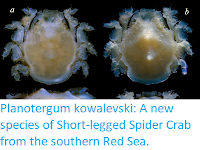 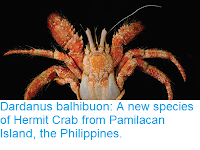 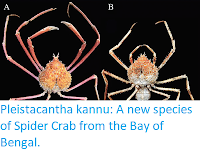