Understanding the role of sediment-gravity flows in the formation of the Cambrian Burgess Shale Lagerstätte.

The fossil record has been used to reconstruct a history of the evolution of life on Earth, but itself preserves a rather incomplete record. Almost all fossils are of biomineralised or other hard tissues, with only rare sites, known as Konservat Lagerstätten, preserving soft tissues or the bodies of organisms which lack hard tissues. Estimates of the preservation potential of modern organisms suggest that 30% of marine megafuana, and 80% of megafauna overall, would leave no fossil record in normal deposits. Much of our understanding of the emergence of modern Animals comes from Cambrian Konservat Lagerstätten, such as the Burgess Shale, where it is estimated that 86% of the preserved fauna would not be preserved under normal conditions. This makes understanding the processes which led to the creation of these deposits particularlt important. It is often assumed that the Burgess Shale represents the near-faithful preservation of an intact biological community, and these fossils have been used to reconstruct food webs and community structures, but it is unclear whether the conditions which led to the preservation of these fossils did indeed preserve a high fidelity impression of a living community, or created biases which we have not detected and have worked into our understanding of how these ancient communities worked, and thus how modern communities developed from those early, Cambrian examples.

The Burgess Shale Lagerstätte is considered to be one of the most important fossil faunas known, producing a large range of soft bodied organisms from an outer shelf Middle Cambrian environment. Understanding rhe mechanisms that led organisms to be preserved here is a key to understanding the biodiversity of the original ecosystem, as well as those of the forty plus other Cambrian sites around the world which show 'Burgess Shale-type preservation'. However, there has been a long-standing debate about the role of sediment transportation in the preservation of the Burgiss Shale Fauna, with the sediments that host the fossils originally diagnosed as having been produced in dilute turbidity currents, in which organisms were transported and then buried, then to have been in situ organisms which were buried by the turbidites. More recently, the deposits have been re-interpreted to be mud-rich slurry flows, an interpretation which, if right, would have profound implications for any soft bodied organism caught up in them.

Field observations of the Burgess Shale exposure at Walcott Quary in British Colombia revealed that the deposits are made up of a series of silt and clay beds, with 'floating' quartz grains which average 100–500 μm in size, but can reach up to 1000 μm. These beds tend to have scoured bases, and structures such as parallel laminations, which are considered to be indicative of sediment transport. Bath Enright et al. interpret these structures as having been laid down by transitional cohesive flows, with both turbulent and laminar characteristics.

Bath Enright et al. next developed an index of degradation for Alitta virens, using specimens decayed for 0, 24, or 48 hours, and then subjected to conditions similar to those they interpret for the deposition of the Burgess Shale in a flume tank, for 25, 225, or 900 minutes. As a control measure, specimens were subjected to static decay for similar periods of time. Specimens that were partially decayed prior to transport produced a variety of results, ranging from whole, but shrivelled, to an unsupported gut with fluid escape and a general flattening of the body. The specimens tended to decay more rapidly at their posterior ends and mid-section; pre-decayed and then transported specimens tended to be more damaged towards their posterior ends.

Next, Bath Enright et al. examined 197 specimens of Polychaete Worms from the Burgess Shale, 154 specimens of Burgessochaeta, and 43 specimens of Canadia. Very few of these showed any sign of degradation, and few of those that did showed little preference in where this occurred, although in these the preference was for the posterior to be more decayed. 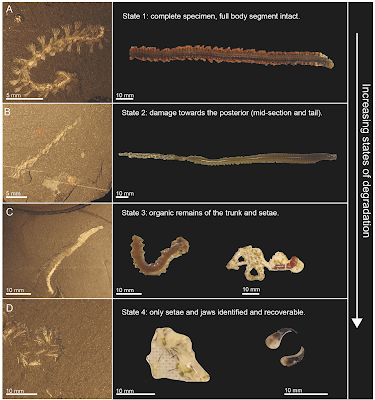 Increasing states of Polychaete degradation. Alitta virens (right) and comparable states in the fossil, Burgessochaeta (left). (A) State 1-complete Polychaete, entire body segment intact (ROM–64913). (B) State 2-damage towards the mid-section and posterior transforms into tangled remains caused by the combination of transport and decay. The body remains intact as one segment (ROM–64916). (C) State 3-remains of the trunk and setae. The body structure has deteriorated significantly (ROM–64914). (D) State 4-remains of loose setae are attached to minute segments of cuticle and jaw elements only are recovered (ROM–64915). Bath Enright et al. (2021).

Based upon the analysis of the flume tank specimens, and comparison to specimens from Walcott Quarry, Bath Enright et al. conclude that the specimens of the Burgess Shale could have been transported in quasi-laminar flows for more than 20 km before being burried. This long distance preservation in quasi-laminar flows implied in this is in contrast to the situation seen in turbulent flows, which are more widely studied, and in which the amount of damage seen tends to increase with the distance of transport. However, Bath Enright et al. also note that this is not the case for specimens heavily decayed before transportation.

From these observations, Bath Enright et al. conclude that the specimens of the Burgess Shale were mostly un-decayed before being caught in the flows. Many of the Burgess Shale Polychaetes are compressed, but have no preferred orientation, and are typically found within the beds, rather than at their tops or bottoms. This suggests that they were transported within the flow, rather than being buried by it. At the end of Bath Enright et al.'s experiments, the sediments remained in a soupy state for some time, and living Worms were rapidly able to escape. Assuming the same applied at in the Burgess Shale, then any Worms remaining in the sediment must have been dead. Interpretation of the oxidation state of the Burgess Shale is complex, but it has been suggested that the oxic/anoxic boundary happened at the sediment surface, and the deposits are free of signs of burrowing or other bioturbation that would be expected if Worms were living in the sediment. 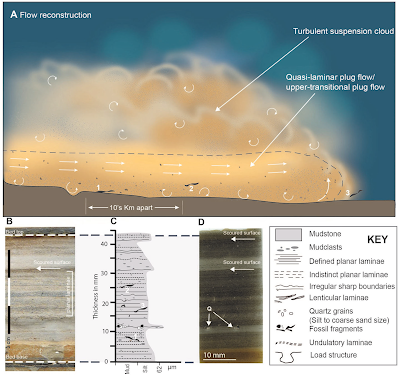 Schematic flow reconstruction for the Walcott Quarry in the Burgess Shale. (A) Schematic Representation in which the laminar plug extends towards the base of the flow and changes to a transitional plug regime. A turbulent cloud of sediment is suspended in the water column above the plug flow. The soft-bodied organisms (labelled 1, 2, and 3) have been picked up along the flow path, potentially kilometres apart from one another. (B) Bed A from the Greater Phyllopod Bed of the Walcott Quarry. (C) Graphic log showing Bed A; soft-bodied organisms (1, 2, and 3) from the flow type above (A) will become mixed in the deposit. (D) Thin-section scan from Bed A showing parallel laminae, erosive, scoured bases, and 'floating' quartz grains (Q). White arrows indicate transitional cohesive flow deposits. Bath Enright et al. (2021).

Burgess Shale-type lagerstätten are traditionally viewed as ‘windows’ into the biology and ecology of past life and are used to reconstruct in-life communities. However, Bath Enright et al.'s  study casts doubt on the validity of this, suggesting that the sediments present may have been transported very long distances, potentially collecting organisms from a variety of habitats before finally settling. In particular the Cambrian Chengjiang and Qingjiang biotas of China, and Upper Ordovician Beecher’s Trilobite Bed of the USA are widely interpreted to been emplaced by flows, and might therefore also have interpreted organisms from multiple environments.

Konservat Lagerstätten provide us with a great deal of information about past life, due to their unique preservation of soft tissues and soft bodied organisms. These deposits tell us a great deal of information about the anatomy of long dead organisms, and have helped us to understand the origins of many living groups of organisms. However, Bath Enright et al. caution against attempts to reconstruct ancient biological communities based upon these deposits, without clear indication that the fossils have been preserved in their life-environment. 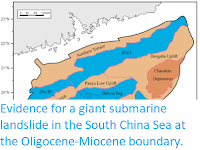 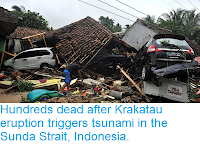 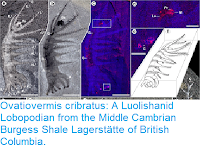 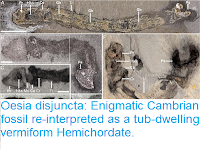