A new species of Nectar-Feeding Bat from Brazil.

New World Nectar-Feeding Bats (Phyllostomidae) evolved separately from the Nectar-Feeding Bats of the Old World (which may themselves represent more than one evolutionary lineage). They can be split into two distinct groups, the Lonchophyllinae which extract nectar by the means of two deep groves on either side of their tongue, and the Glossophaginae, which feed by means of a brush-like apparatus on their tongues.

In a paper published in the American Museum Novitates on 25 June 2012, Marcelo Nogueira, Isaac Lima and Adriano Peracchi of the Laboratório de Mastozoologia at the Universidade Federal Rural do Rio de Janeiro and Nancy Simmons of the Department of Mammalogy at the Division of Vertebrate Zoology at the American Museum of Natural History describe a new species of Glossophagin Bat from the Coastal Forests of Brazil.

The new species is described from two Bats captured in tableland Atlantic forest at the Reserva Natural Vale in the north of the state of Espírito Santo, in southeastern Brazil, and a third specimen from  semideciduous seasonal tableland Atlantic forest at the Floresta Nacional de Goytacazes reserve about 30 km south on the right bank of the Rio Doce. These tableland forests are considered to be the most botanically species rich parts of the Atlantic Forests. 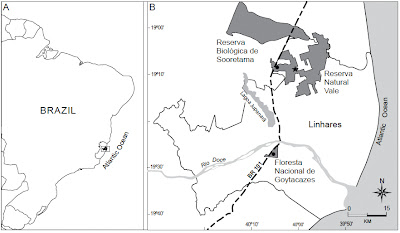 The new species is named Dryadonycteris capixaba, where Dryadonycteris means 'bat from Dryades' (a reference to the name 'Dryades' which was used by the 19th-century German naturalist Karl Friedrich Philipp von Martius to describe the Atlantic Forrest Floral Province) and capixaba is a Tulpi word meaning from Espírito Santo.

Dryadonycteris capixaba is a small Glossophagin Bat, slightly over 55 mm in length, with an elongate snout, lacking lower incisors, having a triangular noseleaf and having tricoloured banding of its fur (i.e., each hair has a pale middle band and darker basal and distal bands). The Bats were captured in ground-level mist nets in both dry and wet seasons. The areas where they were captured have been sampled for Bats extensively, implying these are quite rare animals. The forests if Floresta Nacional de Goytacazes are quite badly fragmented, suggesting that Dryadonycteris capixaba may be able to cope with such conditions. 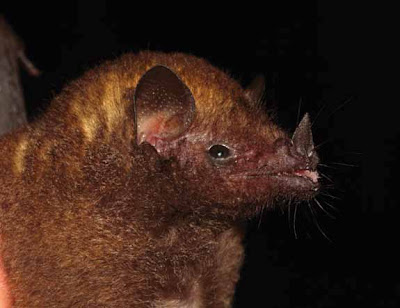