In a paper published on 4 July 2012 on the online arXiv database at Cornell University Library, a team of scientists led by James Jenkins of the Departamento de Astronomia at the Universidad de Chile and the Centre for Astrophysics at the University of Hertfordshire announce the discovery of a planet orbiting HD 77338, made by the Calan-Hertfordshire Extrasolar Planet Search, reviewing data from the High Accuracy Radial velocity Planetary Search project.

HD77338b, as the planet is named (bodies in other stellar systems are named alphabetically, with stars given upper case letters and planets lower case letters), orbits the star (now HD77338A) every 5.74 days (138 hours) at a distance of 0.061 AU (6.1% of the distance between the Earth and the Sun), and has a minimum mass of 15.9 times that of the Earth (comparable to 14.6 Earth masses for Uranus and 17.2 Earth masses for Neptune in our own Solar System. 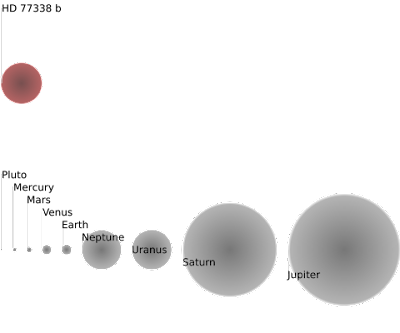 The mass of HD77338b compared to the mass of the planets of our solar system. The Visual Exoplanet Catalogue.