Cave Crabs of the genus Orcovita are known from marine caves across the West Pacific. They tend to have localized distributions, inhabiting limestone caves on Oceanic Islands.

In a paper published in The Raffles Bulletin of Zoology on 29 February 2012, Peter Davie of the Queensland Museum and Peter Ng of the Tropical Marine Science Institute and Raffles Museum of Biodiversity Research at the Department of Biological Sciences at the National University of Singapore describe two new species of Cave Crabs in the genus, both from Christmas Island in the southern Indian Ocean; the first time such crabs have been described from the Indian Ocean. Both new crabs are described from specimens captured using commercially available baited crab traps.

The first new species described is named Orcovita orchardorum, in honour of Max Orchard, the Head Ranger on Christmas Island for 18 years and subsequently Project Officer on the island, and his wife Beverly, who between them have made an invaluable contribution to conservation on the island. Orcovita orchardorum is a yellowish-brown Crab up to 23 mm in width.

The second new species described is Orcovita hicksi, named in honour of John Hicks who was the Australian Government Conservator on Christmas Island from 1979 to 1983, and who wrote a noted book on the Crabs of the island. It is a yellowish-white to orange Crab up to 21 mm in width, though specimens larger than 16 mm tend to be lighter in colour. 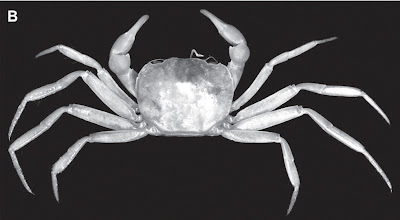 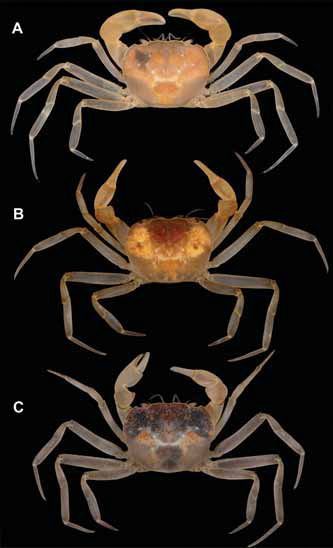 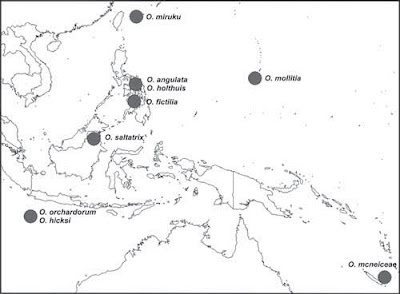 Map showing the distribution of known species in the genus Orcovita. Davie & Ng (2012).