On Wednesday 12 September, slightly before 6.30 am, local time (slightly before 3.30 am GMT) the United States Geological Survey recorded a Magnitude 5.5 Earthquake 50 km south of western Crete, close to the island of Nísos Gávdos, at a depth of 27.4 km. No injuries or damage have been reported, but the quake is likely to have been felt across most of Crete. 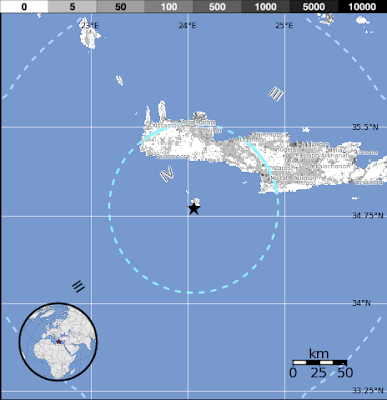 Map showing the location of the 12 September Earthquake, and the areas likely to have felt shaking. USGS. 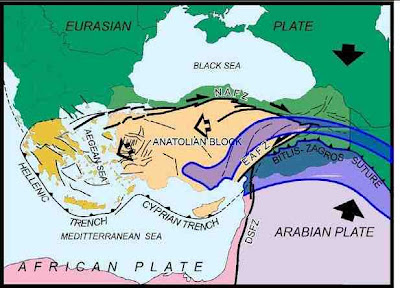 Map showing the relative positions and movement of the Eurasian, Aegean, Anatolian, Arabian and African Plates; the Eurasian Plate is actually moving northward, but relative to the other plates in this image, it is moving southward. Univeriteit Utrecht.

See also Earthquake off the Turkish coast, A new study of the Santorini eruption that destroyed ancient Minoa, Dodecanese Islands and Crete shaken by Earthquake, Earthquake in the Gulf of Corinth, Greece. 7 August 2011 and Earthquakes on Sciency Thoughts YouTube.