Snail-eating Snakes of the genus Sibon are small, slender snakes native to Central America. They are nocturnal and often have banded patterns, causing them to resemble Coral Snakes, or bright colours resembling those of arboreal Pit Vipers. Biologists call this Batesian mimicry, whereby a species of animal or plant mimics a more harmful species in order to deter predators.

In a paper published in the journal Zootaxa on 17 September 2012, Sebastian Lotzkat and Andreas Hertz of the Senckenberg Forschungsinstitut und Naturmuseum and the Institute for Ecology, Evolution & Diversity at Goethe-University and Gunther Kohler of the Senckenberg Forschungsinstitut und Naturmuseum describe a new species of Snail-eating snake from the Caribbean side of the Cordillera Central mountain range in Western Panama. 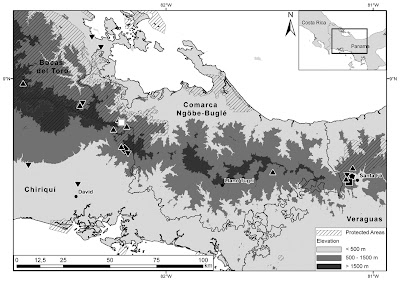 The new species is named Sibon noalamina, where noalamina derives from the Spanish 'no a la mina!', or 'no to the mine', a slogan used by indigenous Ngöbe communities opposed to mining in the Serranía de Tabasará, in order to show the authors support for 'the Ngöbe’s struggle to protect their territory and environment, which is home to the new species described herein and many others, from profit-driven destructive interventions'.

Sibon noalamina is a 546 mm+ slender snake with a brown and yellow striped pattern, destingiushed by having only 5 pairs of supralabial scales (scales on the upper lip) and by having slightly keeled scales on the third, fourth and fifth dorsal rows on the midbody. The snakes were found living on vegetation, in ridgetop cloud forest with abundant epiphyts. 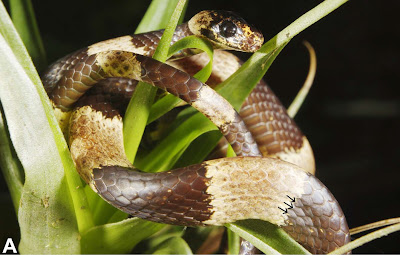 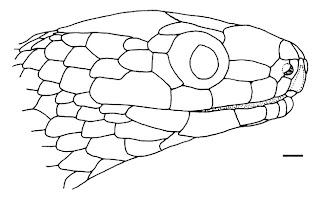 Line drawing of the head of Sibon noalamina, showing the patern of the scales. Scale bar is 1 mm. Lotzkat et al. (2012). 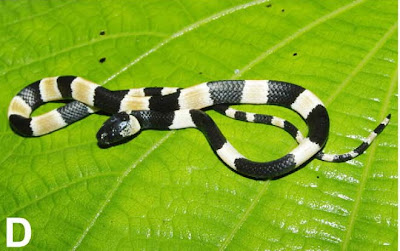 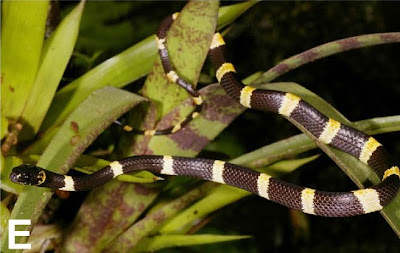 See also New species of Treesnakes from the Comoras, New species of Asian Coral Snake from western India, Velvet Geckos and Broad-headed Snakes; understanding the population structure of a favored prey item in order to help protect an endangered predator, and Reptiles on Sciency Thoughts YouTube.