The evolution of Galeommatoid Bivalves.

Galeommatoid Bivalves are a large group of Molluscs that inhabit a broad range of environments and often form commensal relationships with a broad range of other invertebrates. Their classification has been somewhat uncertain, with the group divided into either two (Galeommatidae and Lasaeidae) or four (Galeommatidae, Lasaeidae, Kelliidae and Montacutidae) families.

In a paper published in the journal BMC Evolutionary Biology on 6 September 2012, a group of scientists led by Ryutaro Goto of the Graduate School of Human and Environmental Studies at Kyoto University and the Department of Marine Ecosystem Dynamics at the Atmosphere and Ocean Research Institute at The University of Tokyo, publish the results of a genetic study into relationships within the Galeommatoid Bivalves.

Goto et al. found that the Galeommatoid Bivalves are split into six clades (distinct evolutionary lineages), but that these bore no relationship to either previous classification of the group.

Galeommatoid Bivalves are known to colonise a number of very different invertebrate hosts, notably Crustaceans, Sea Cucumbers, Spoon Worms, Sipunculan Worms, Brachiopods, Bryozoans, Annelids, and other Bivalves. Typically when epibiotic animals (animals that live on the surface of other organisms) switch hosts they do so between closely related species, with jumps between distantly related species being rare. However each clade of Galeommatoid Bivalves contained species which lived on very different hosts, with host species apparently being no guide to relationships within the Galeommatoid Bivalves. When parasites colonise new hosts they have to learn to get past the defences of the new organism, however Galeommatoid Bivalves are not true parasites; they live on the bodies of other invertebrates but gain nutrition by filter feeding from the water column, and few (if any) animals seem to have defences against this sort of colonisation, apparently making it easy for Galeommatoid Bivalves to switch between unrelated hosts. 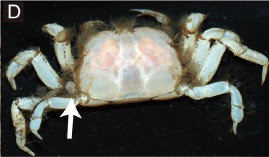 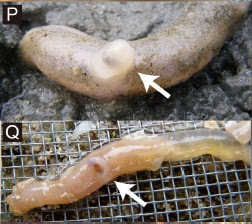 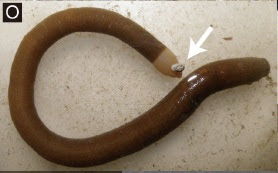 Finally Goto et al. identified four ways in which Galeommatoid Bivalves colonised their hosts. Two of these, living inside shells used by Hermit Crabs and living inside the esophaguses of Sea Cucumbers, were utilised by single species, suggesting that these were unique evolutionary innovations, with little taxonomic significance. The remaining two methods, colonising the surface of the bodies of the host animals, and colonising the burrows of the hosts, were found in a variety of unrelated forms, suggesting that Galeommatoid Bivalves are also able to switch easily between these lifestyles. 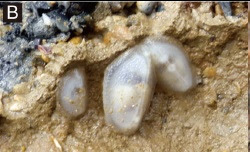 The Galeommatoid Bivalve Ephippodonta gigas that lives in the burrows of Thalassinidean Shrimps. Goto et al. (2012).

This suggests that Galeommatoid Bivalves are extremely elastic in their ability to colonise new hosts and therefore new environments, which helps to explain the success of the group, even if it does make its taxonomy difficult to understand.