Rove Beetles are an unusual-looking group of Beetles, distinguished by their short wing cases, which makes them look rather unbeetle-like. They are a successful group, with over 46 000 described species and a fossil record that dates back to the Triassic. Semiaquatic Rove Beetles of the genus Stenus are capable of swimming by producing secretions that reduce surface tension (often a problem for small insects caught in it).

In a paper published in the journal ZooKeys on 17 August 2012, Liang Tang and Li-Zhen Li of the Department of Biology at Shanghai Normal University and Jun-Wang Wang of the Qingliangfeng Nature Reserve administration describe two new species of Semiaquatic Rove Beetles from Guangxi and Zhejiang Provinces in China.

The first new species described is named Stenus huapingensis, meaning 'coming from Hauping'; the species is described from six male and twelve female specimens collected from the Huaping Nature Reserve in Guangxi Province. The Beetles were found living on Bamboo and Broadleaf Tree leaves in dense forest. They are 4-5 mm blackish Rove Beetles with yellowish brown legs and orange spots on their backs. 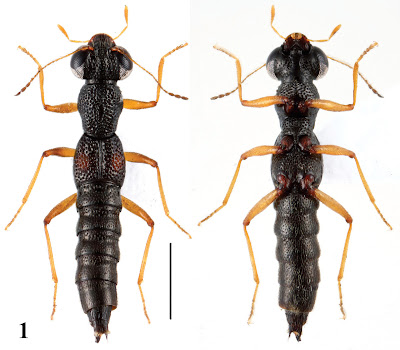 The second new species is named Stenus zhujianqingi, in honour of Mr. Jian-Qing Zhu, who collected the specimens from which the species is described; seventeen male and three female Beetles from leaves in mixed Conifer/Broadleaf forest, in the Qingliangfeng Nature Reserve in Zhejiang Province. These are black Rove Beetles with redish legs, 4.0-4.3 mm in length. 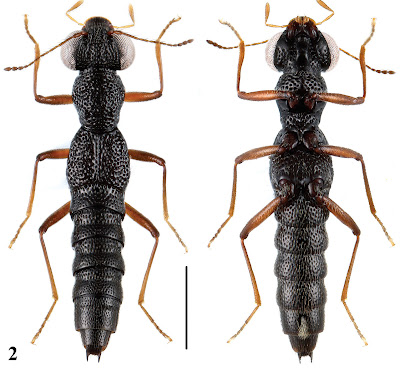