The discovery of the Burmese Snub-nosed Monkey, Rhinopithecus strykeri, was announced in January 2011 in a paper in the American Journal of Primatology, by a team of scientists led by Thomas Geissmann of the Anthropological Institute at the University Zürich-Irchel and the Asia Pacific Programme at Fauna & Flora International. The species was described on the basis of a dead male monkey and two skulls (one male, one female), and the skin of a juvenile, obtained from hunters in Kachin State in the northeast of Myanmar (Burma), plus descriptions of the Monkey's behavior also from hunters; no Monkey was observed by the scientists. 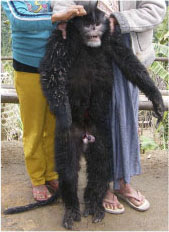 The Burmese Snub-nosed monkey has subsequently been discovered in China, as described in a second paper in the American Journal of Primatology in October 2012, by a team of scientists led by Yongcheng Long of The Nature Conservancy China Program.

In October 2011 forest guards in the Gaoligongshan National Nature Reserve spotted a group of unknown Monkeys, identified by local people as 'Meyah', but unknown to reserve staff. Two photographs were taken and sent to Yongcheng Long for identification, from which he concluded that these were most likely Burmese Snub-nosed Monkeys. At his request they gathered hair and feces left by the monkeys for DNA analysis, but this proved inconclusive. 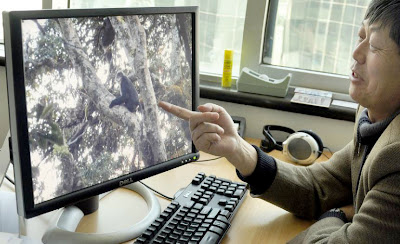 A Chinese scientist inspecting a picture of a Snub-nosed Monkey.

The Chinese State Forestry Administration is currently organizing a survey of the distribution of the Monkeys within China, and is reportedly interested in forming a cross-border conservation program with the Ministry of Environmental Conservation and Forestry in Myanmar. 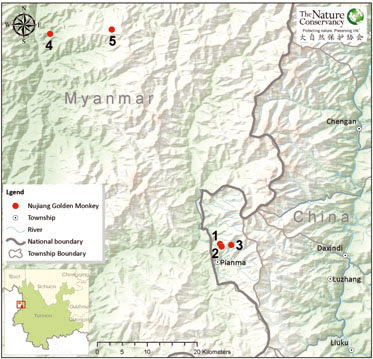 
See also An Omomyid Primate from the Eocene of South London, New Mouse Lemur discovered in Madagascar, A re-evaluation of the Iwo Eleru skull, Ancient Ape Skull found in Uganda and Mammals on Sciency Thoughts YouTube.