In late March 2009 the L'Aquila area of Central Italy was shaken by a number of small Earth tremors, prompting a meeting of the Serious Risks Commission, a group of Italian geoscientists charged with assessing the threat presented by geological hazards, such as Earthquakes or volcanoes. The scientists, having examined the available data, concluded that there was no way to predict whether the events were the precursors to a larger event or not, but that it would be wise to tighten building regulations in the area in the longer term.

On 6 April a Magnitude 6.3 Earthquake struck the area at a depth of 9.5 km, leading to severe damage to the medieval city of L'Aquila, with at least 3000 buildings damaged, several of which collapsed completely. A total of 308 people lost their lives, with a further 1500 being injured and about 65 000 being made homeless. 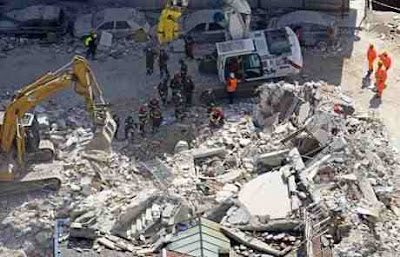 The clear-up operation after the 6 April 2009 Earthquake in l'Aquila. Reuters.

In June 2010 public prosecutors in l'Aquila decided to bring legal action against the members of the committee present at the 31 March meeting, for failing to predict the quake. Charges of manslaughter were brought against six scientists and one civil servant; Bernardo De Bernardinis, then vice-president of the Italian National Service of Civil Protection, and now President of the Istituto Superiore per la Protezione e la Ricerca Ambientale (ISPRA); Enzo Boschi, president of the L’Istituto Nazionale di Geofisica e Vulcanologia; Giulio Selvaggi, director of the Italian National Earthquake Center; Franco Barberi, a volcanologist at the University of Rome; Claudio Eva, professor of Earth Physics at the University of Genoa; Mauro Dolce, head of the seismic risk office of the Italian government’s Civil Protection Agency; and Gian Michele Calvi, Director of the European Centre for Training and Research in Earthquake Engineering.

In addition to the manslaughter charges damages of 50 million Euros are being sought by the city council in l'Aquila and a group called '309 Martyrs' which was founded by a local doctor, Vincenzo Vittorini, whose wife and daughter were killed in the quake. Prosecutors are seeking four year gaol sentences for the defendants (Italian law allows for a maximum sentence of 15 years for manslaughter). The trial has been adjourned until 9 October, when the defense will present closing arguments.

The trial has been widely criticized both in Italy and around the world, with scientists pointing out that Earthquakes are inherently hard to predict, and that a guilty verdict could make potentially make any form of scientific (or medical) prediction impossible in Italy. Over 5000 scientists have signed an open letter to Italian President Giorgio Napolitano, organized by the American Association for the Advancement of Science. Many critics have suggested that the trial is a smokescreen to cover widespread corruption in the Italian construction industry, and even the failings of the Berlusconi government in Italy, which was in the process of falling apart when the trial was initiated.

Italy is one of Europe's most Earthquake-prone countries, as it is caught in the collisional zone between Africa and Eurasia, with a tectonic plate boundary running the length of the country. The west of the country lies on the Eurasian Plate, but the east of Italy is on the Adriatic Plate, a micro-plate which broke away from the African Plate and is now sticking into the Eurasian Plate, underlying eastern Italy and the west of the Balkan Peninsula. In addition the African Plate is being subducted beneath the Eurasian Plate in the south of the country, fueling volcanism and Earthquake activity from Naples south to Sicily. 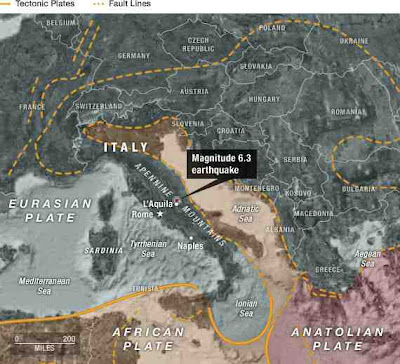