Small Llamas from the Late Pleistocene of Central Mexico.

The new material came from three separate sites in Hildago State, all assigned to the Rancholbrean North American Faunal Stage on the basis of other fossils present, making them between 240 000 and 11 000 years old; this is the last faunal stage of the Pleistocene in North America. 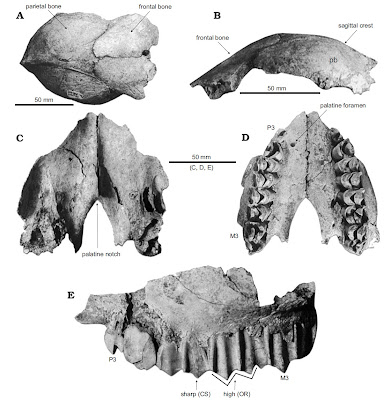 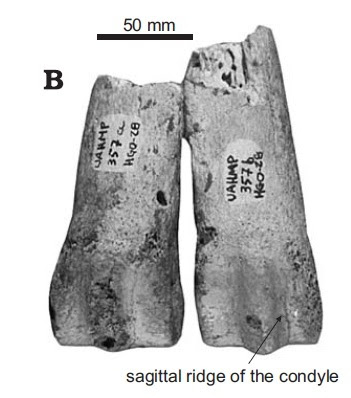 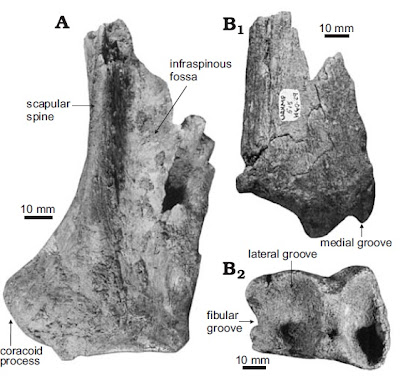 Material referred to Hemiauchenia gracilis from Barranca San Agustín. (A) Distal end of left scapula in lateral view. (B) Distal end of left tibia (UAHMO−515) in anterior (B1) and distal (B2) views, showing the articular surface. Bravo-Cuevas et al. (2012).

Mandible and lower dentition of the camelid Hemiauchenia gracilis, in lateral (A) and occlusal (B) views. Bravo-Cuevas et al. (2012). 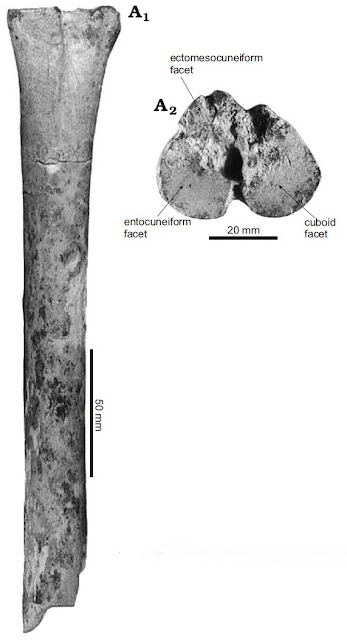 Left metatarsal of the camelid Hemiauchenia gracilis in anterior (A1) and proximal (A2) views,
showing the articular surface. Bravo-Cuevas et al. (2012). 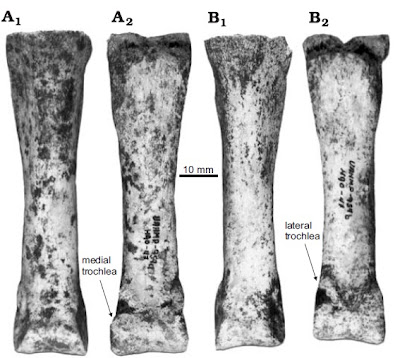 These are the latest known specimens of Hemiauchenia gracilis and are at the southern end of the species known range. This suggests that the species became restricted in the southern part of its range as the Pleistocene progressed, with fossils from the earliest part of its range, the Early Blancan Faunal Stage (equivalent to the Late Pliocene, or between 4.3 and 2.6 million years ago) found from Idaho to Mexico, then by the Late Blancan (Early Pleistocene, or 2 588 000 to 1 808 000 years ago) being found no further north than Arizona, New Mexico and Florida, then in the Irvingtonian (Middle Pleistocene, 1,800,000 to 240,000 years ago) being restricted to Mexico, with the new Rancholabrean fossils found only in Central Mexico. 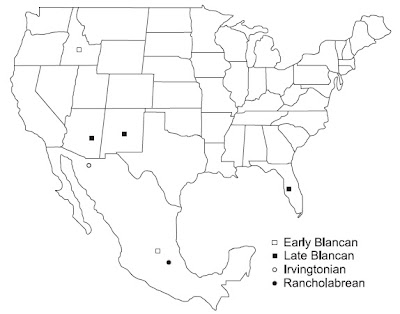 Like many (most) scientific theories this diminishing distribution over time is only testable in that it could potentially be disproved. A single fossil in an area where the species was thought to have become locally extinct would prove the theory wrong, but it is never possible to say with complete confidence that it was absent from an area, since absence of evidence is not evidence of absence, so the theory can never actually be proved.

See also New species of Ground Opossum from eastern Bolivia, New Caviomorph Rodents from the Early Oligocene Tinguiririca Fauna of the Andean Main Range of central Chile, A new Ground Sloth from the Late Miocene of Argentina, The origin of domestic dogs, and Mammals on Sciency Thoughts YouTube.