On Sunday 2 August 2012, slightly after 6.05 pm British Summertime (slightly after 5.05 pm GMT), the British Geological Survey recorded a small Earthquake 8 km beneath the Cheshire village of Ollerton, roughly 16 km west of Macclesfield. The quake was recorded as measuring 0.7 on the Richter Scale, far to small to have caused any damage or injuries, and probably to small to have been noticed. 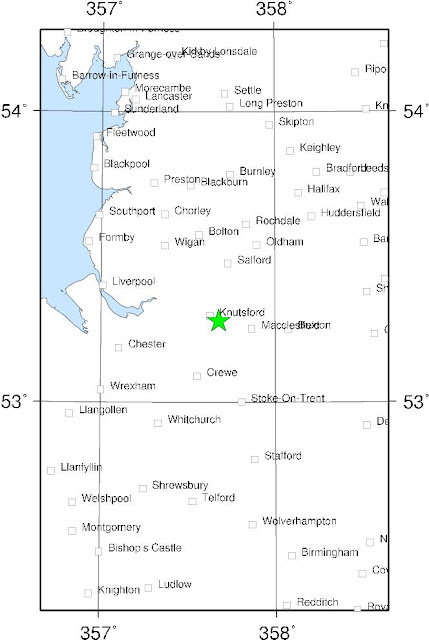 Map showing the location of the 2 August 2012 Earthquake. BGS.


As a rough rule of thumb Earthquakes become more common in Great Britain as you move further north and west, making Cheshire one of England's more quake-prone counties. The precise cause of quakes in the UK can be hard to determine, as the country is a long way from any active plate margin, but is subject to tectonic stresses from a number of sources. Most quakes probably cannot be attributed to a single source, but rather to a combination of stresses from a number of sources.

Britain, along with the rest of Eurasia, is being pushed to the east by the expansion of the Atlantic Ocean, and to the north by the impact of Africa into Europe from the south. It is also subject to stresss caused by smaller expansion centers beneath the North Sea, the Rhine Valley and the Bay of Biscay. In addition the country is still suffering the effects of glacial rebound. Until about 10 000 years ago much of the north of Britain was covered by a layer of glacial ice hundreds of meters thick, which pushed the rocks of the British lithosphere down into the underlying mantle. This ice has now gone, and the rocks are slowly sprining back up, causing the occational Earthquake in the process.

Witness reports of Earthquakes help geologists to understand the processes and structures that cause them. If you felt this quake you can report it to the BGS here; they would also be interested in hearing from people in the area who did not feel the quake, which is also useful information.