Asteroid 4 Vesta will reach opposition (the point at which it is directly opposite the Sun when observed from the Earth) at 11,58 am GMT on Monday 22 August 2022, when it will also be at the closest point on its orbit to the Earth, 1.29 AU (i.e. 1.29 times as far from the Earth as the Sun, or about 102 223 000 km), and be completely illuminated by the Sun. While it is not obvious to the naked eye observer, asteroids have phases just like those of the Moon; being further from the Sun than the Earth, 4 Vesta is 'full' when directly opposite the Sun. As 4 Vesta is only about 525 km in diameter, it will not be visible to the naked eye, but with a maximum Apparent Magnitude (luminosity) of 6.1 at opposition, it should be visible in the Constellation of Aquarius to viewers equipped with a good pair of binoculars or small telescope. 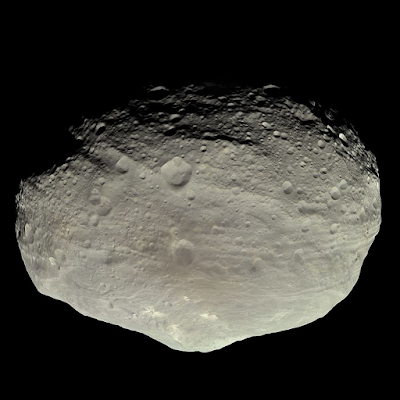 Asteroid 4 Vesta imaged by the Dawn space probe on 24 July 2011, from a distance of 5200 km. Björn Jónsson/NASA/JPL/MPS/DLR/IDA/Wikimedia Commons.

Asteroid 4 Vesta was discovered on 29 March 1807 by the German astronomer Heinrich Wilhelm Matthias Olbers, making it the fourth asteroid discovered, and the second by Olbers (who had discovered 2 Pallas on 28 March 1802). The asteroid was named Vesta in honour of the Roman goddess of the hearth. 4 Vesta is currently considered to be the second largest body in the Main Asteroid Belt, although uncertainty about the size of Asteroid 2 Pallas, means this is not completely certain. 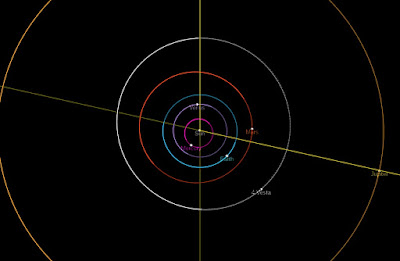 The calculated orbit and position of 4 Vesta on 22 August 2022.  JPL Small Body Database. 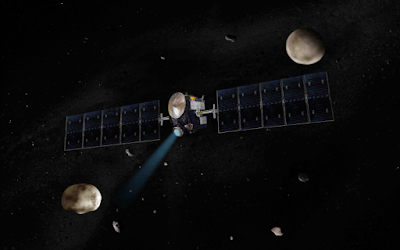 The Dawn space probe orbited 4 Vesta from 16 July 2011 until 5 September 2012 (when it left to move on to Asteroid 1 Ceres). During this time it built up a detailed map of the surface of 4 Vesta, which revealed a northern surface covered with craters; apparently much older than the southern surface, suggesting that the asteroid was once a planetesimal on its way to growing into a planet.