Wildfires in the Silurian.

Free oxygen first appeared in the Earth's atmosphere during the Great Oxidation Event, between 2.5 and 2.3 billion years ago, and has played a significant role in all biogeochemical cycles ever since. A soil-forming microbial cover is thought to have begun to form on the Earth's landmasses about 850 million years ago, which further contributed to the oxygen content of the atmosphere. Following this, atmospheric oxygen concentrations are thought to have remained fairly constant until the appearance of the first land Plants in the Ordovician.

These first Plants emerged into a world already dominated by Fungi, a group which quickly acquired the ability to both break-down the tissues of dead plants, and to form mycorrhizal relationships with living ones, enhancing the flow of nutrients through these primitive terrestrial ecosystems, and causing another rise in oxygen levels. The oldest known Vascular Plant, Cooksonia, a leafless, dichotomously branching Plant reaching less than 10 cm high, appeared during the Wenlock Epoch of the Silurian, between 433.4 and 427.4 million years ago, and has been recorded from rocks in Ireland and the Czech Republic. However, Cooksonia is not the most common form in the deposits where it is found, it lived in a landscape dominated by Namatophytes, vegetative organisms comprised of aggregations of tubes and cuticles, which were almost certainly Fungi, and possibly Lichens, and fossils of which have been found around the world.

The appearance of terrestrial Plants is generally accepted to have provoked a rise in atmospheric oxygen levels, although the extent of this is hard to determine, and scientists have differing opinions upon when oxygen levels comparable to those seen today were first achieved.

In a paper published in the journal Geology on 13 June 2022, Ian Glasspool and Robert Gastaldo of the Department of Geology at Colby College, attempt to reconstruct the oxygen content of the Silurian atmosphere, by using charcoal fragments from deposits in Wales and Poland as evidence of Silurian wildfires, which would have required a minimum level of oxygen to occur.

Charcoal can only form when the atmospheric oxygen pressure is between 70% and 140% of that of today's atmosphere. Lower than this, and plant matter will not combust, higher, and it will combust completely, turning all available carbon into CO₂. Charcoal first appears in the Ordovician, suggesting that the atmosphere had sufficient oxygen for it to form then, but disappears again in the (Early Devonian, 419.2-410.8 million years ago), and is absent for much of the the rest of the Devonian.

Glasspool and Gastaldo examine microscopic charred plant fragments from the Middle Silurian Pen-y-lan Mudstone at Rumney in Wales, and which is about 10 million years older than the previous oldest charred vegetative material, from the Late Silurian Winnica Formation at Winnica in Poland. 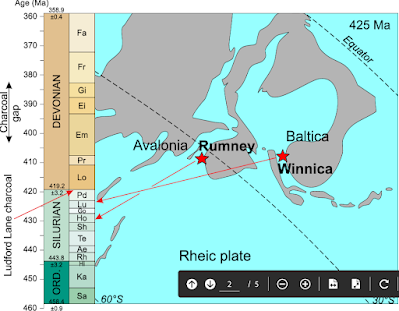 Organic material from Rumney is dominated by Nematophytes, and in particular members of the genus Pachytheca. Glasspool  and Gastaldo obtained charred vegetative fragments from rock samples obtained from a borehole, drilled by the British Geological Survey, at depths of between 314.71 and 316.3 m.

Since the exact nature of Nematophytes is unclear, it was necessary to use proxies to estimate the temperature at which this material may have burned; previous research having found that charcoal can be made from wood at temperatures between 410 and 730°C, and from Bracket Fungi at between 440 and 940°C. Based upon the degree of charring, Glasspool  and Gastaldo conclude that the material from Rumney burned at an average of about 490°C if Namatophytes were woody, or about 540°C if they were Bracket Fungus-like, although the most charred were probably burned at about 640°C (if woody) or 820°C (if Bracket Fungus-like). 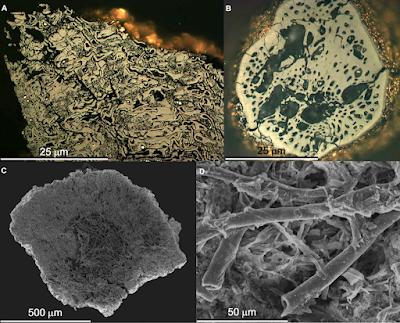 The development of an oxygen-rich atmosphere has been crucial for the development of life on Earth, and particularly so for the emergence of Animals onto land. However, there is no direct way of measuring the oxygen content of ancient atmospheres is impossible, forcing scientists to rely on proxies for this information. As the formation of charcoal requires atmospheric oxygen levels approaching those of today, charcoal is an excellent proxy for the development of an oxygen-rich atmosphere, and Glasspool and Gastaldo's evidence that this may have developed by the Wenlock Epoch of the Silurian Period. about 430 million years ago.

There are some significant carbon isotope excursions (short intervals in which the proportions of carbon isotopes in sedimentary rocks shift significantly) in the Silurian, including notable ones in the Wenlock to Přídolí epochs, which suggests that the Silurian carbon cycle was more prone to severe disruption than that of any other period of the Phanerozoic. While some fairly good models of oxygen fluctuations in the Silurian have been developed, these operate on a scale of tens of millions of years, and cannot provide helpful data on the sort of sudden, short lived events that would cause these isotope excursions. However, a stratigraphic model of fire intervals within the Silurian could potentially address this mystery, something Glasspool and Gastaldo propose creating.

Most current predictions of oxygen levels in the atmosphere suggest that the oxygen content remained below 15% from the Late Ordovician until the Early Devonian. However, this is inconsistent with evidence for wildfires in the Silurian, as an oxygen content of 16% or above is needed for the combustion of dry vegetative matter. One model (GEOCARBSULFOR) does allow for higher oxygen levels, but still below 18%, which would allow for small fires under very dry conditions, though Glasspool and Gastaldo question whether any Silurian Plant or Fungus was capable of surviving in such an environment. The deposits at Rumney record a fairly high proportion of charcoal in a marine sediment, which would generally imply a conflagration of some size, inconsistent with any current model of Silurian oxygen levels.

Most of the data from Rumney implies a fairly low temperature fire (how low depending on whether the vegetation was Plant- or Fungus-like), but there are charcoal fragments which formed at far higher temperatures, suggesting at least pockets of high temperature fire. This seems implausible given the nature of the fuel, though Glasspool and Gastaldo suggest it it more plausible if Nematophytes were Fungal in nature, as Fungi naturally burn at higher temperatures.

The limiting factor for vegetative growth in the Silurian was probably the availability of phosphorus. Fungi and Bacteria can liberate this from rock to some extent, enabling the growth of Lichens and Plants (the later through symbiotic mycorrhizal relationships), but the phosphorus then becomes locked into the Plant or Fungus body, even after it dies. Fires would have had the ability to free up phosphorus locked into dead vegetation, making it available for new growth on land and in the oceans, where it could prompt blooms of photosynthetic algae, further rising the oxygen level. However, too frequent or severe fires would have damaged the soil structure, killing off microbial communities and creating a sterile environment.