(594913) 2020 AV2 'Ayló'chaxnim: The first discovery of an asteroid orbiting entirely inside the orbit of Venus.

The object was discovered by the Zwicky Transient Facility at the Palomar Observatory, which used the Samuel Oschin Schmidt Telescope to detect transients (short lived phenomena) in the Northern Hemisphere sky. Specifically, a portion of the Zwicky Transient Facility's activities, the Twilight Survey, is dedicated to looking at objects and events close to the Sun, alternating between evening and morning observing twilight on clear nights.

This survey covered approximately 40 000 square degrees of sky between September 2019 and January 2020, covering an area with a solar elongation of between 35 and 60 degrees. Objects orbiting entirely within the orbit of Venus should have solar elongations of less than 46 degrees, and calculations suggest that about 85% of such objects should have a maximum solar elongation which falls within the range covered by the Zwicky Transient Facility's Twilight Survey. 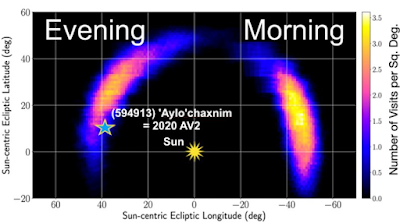 Sun-centric sky distribution of Twilight Survey coverage between 2019 September 19 and 2020 January 30. The blue star indicates the first observed location of 2020 AV2 and the yellow star indicates the Sun. The colour scale is the number of Zwicky Transient Facility visits per square degree. Bolin et al. (2020).

Following this initial discovery follow-up observations were made with the Kitt Peak Electron Multiplying Charge Coupled Device Demonstrator on 9 January 2020, and the Southern Astrophysical Research Telescope and Magellan Telescope on 17-19 July 2020. These observations enabled the calculation of the orbit of 2020 AV2, establishing that it has an aphelion distance (the point on its orbit which is furthest from the Sun) of 0.65 AU (65% of the distance at which the Earth orbit's the Sun). This places the orbit of 2020 AV2 entirely inside the orbit of Venus, which has a perihelion distance (point on its orbit closest to the Sun) of 0.71 AU.

This conformation led to the International Astronomical Union's Minor Planet Centre giving the asteroid the designation (594913), indicating that it is the 594 913rd confirmed asteroid. This conformation gives its discoverers the right to name the asteroid (a right which is not always exercised, given the very large number of asteroids discovered, and the fact that the majority of these are discovered by automated surveys), with the International Astronomical Union's Working Group on Small Body Nomenclature accepting the name 'Ayló'chaxnim, which means 'Venus girl' in the Luiseño language indigenous to southern California, on 8 November 2021. Bolin et al. further propose that the term 'Ayló'chaxnim be used as a generic name for all asteroids orbiting inside the orbit of Venus. Zwicky Transient Facility images of 'Ayló'chaxnim. (A) One of the Zwicky Transient Facility discovery 30 second r-band images of 'Ayló'chaxnim taken on 4 January 2020. 'Ayló'chaxnim is indicated by the red circle. (B) Composite image of the first four Zwicky Transient Facility 30 second r-band exposures over a 22 minute time interval. The images were aligned on the background stars before being co-added. 'Ayló'chaxnim is indicated by the red circles, with the first observation labelled with a red arrow. The apparent faintness of the third detection is due to variations in sky transparency over the 22 minute sequence. The asteroid was moving about 130 arcseconds per hour in the northeast direction resulting in a roughly 10 arcseconds spacing between the detections of 'Ayló'chaxnim. The spatial scale in (B) is the same as in (A). (C) Recovery image of 'Ayló'chaxnim made using the 6.5 m Magellan Baade telescope and Four Star infrared camera on 2021 July 18. The asteroid was moving in the northeast direction at 100 arcseconds per hour. The cardinal directions are indicated. Bolin et al. (2022).

Bolin et al. calculate that (594913) 2020 AV2 'Ayló'chaxnim will enter a 3:2 orbital resonance with Venus (orbit locked to that of Venus on which it will orbit three times for every two orbits of Venus) in approximately 60 000 years time, and that 10 000 years later repeated close encounters with Mercury will have caused it to have lost much of the variation in its orbital path. This resonant orbit will protect the asteroid from close encounters with Venus, in the same way that the resonant orbit between Pluto and Neptune protects Pluto from close encounters with Neptune. (594913) 2020 AV2 'Ayló'chaxnim should remain locked into this orbital resonance for 10 000 years, then move in and out of it for another 100 000 years. 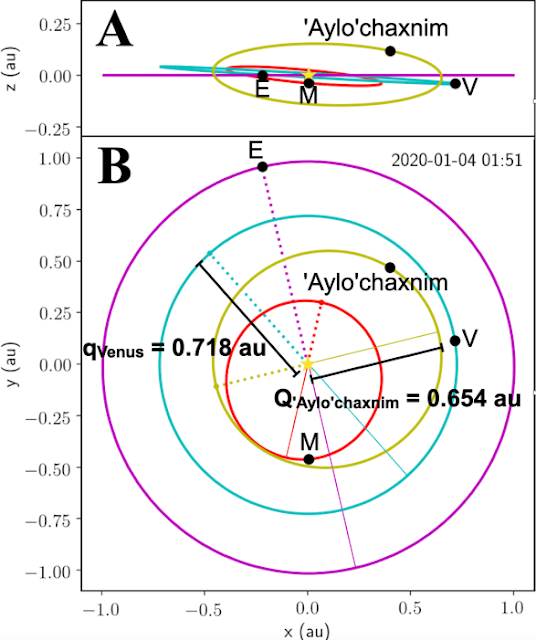 Orbital configuration of 'Ayló'chaxnim. (A) A side view of the plane of the Solar system. The orbits and locations of Earth (purple), Venus (blue), Mercury (red) and 'Ayló'chaxnim (yellow) on 4 January 2020 are shown looking from the side. (B) The same as panel (A) but looking from above the orbital plane of the inner Solar System. The perihelion and aphelion directions of 'Ayló'chaxnim and the planets are plotted with dotted and solid lines respectively. The perihelion distance of Venus, 𝑞Venus, and the aphelion distance of 'Ayló'chaxnim, 𝑄'Aylo'chaxnim are indicated with labelled barred lines. The heliocentric cartesian coordinates 𝑥, 𝑦 and 𝑧 are indicated with the position of the Sun as the origin. Bolin et al. (2022).

Bolin et al. further estimate that (594913) 2020 AV2 'Ayló'chaxnim has migrated to within the orbit of Venus within the past million years, and is likely to remain within this area for about 2 million years from now; earlier calculations of this residence time were shorter, however Bolin et al.'s is based on more data, and therefore presumably more accurate.

There are estimated to be about 1000 Near Earth Asteroids with diameters in excess of 1 km, although only about 0.3% of these (i.e. three km-scale asteroids) are estimated to remain permanently inside the orbit of Venus. Thus (594913) 2020 AV2 'Ayló'chaxnim appears to be a significant (if predicted) discovery of an unusual Solar System body. However, this region of the Solar System is relatively underexplored, leaving us with no independent test of the models of this area at this time.