Provanna exquisita: A new species of Provannid Snail from a submarine volcano in the Mariana Island Arc.

Hydrothermal vent systems are unique deepwater environments with diverse ecosystems driven by chemosythetic micro-organisms able to derive energy using hydrogen sulphide and other compounds, rather than being dependent on photosynthesis. Since their first discovery on the Galápagos Rift in 1977, hydrothermal systems have been found on ocean ridges, volcanic arcs, and back-arc basins across the world's oceans.

Northwest Eifuku is a submarine volcano on the Mariana Volcanic Arc, which hosts a hydrothermal vent ecosystem discharging both hot hydrogen sulphide-rich volcanic vents, and liquid carbon dioxide from cold vents (carbon dioxide is able to form a liquid in the deep ocean due to the high pressure there, but cannot do this at the surface), making the water unusually acidic, with a pH as low as 5.36. This site is covered by dense colonies of marine organisms, dominated by the deepwater Mussel, Bathymodiolus septemdierum.

In a paper published in the journal ZooKeys on 14 July 2022, Chong Chen and Hiromi Kayama Watanabe of the  Japan Agency for Marine-Earth Science and Technology, describe a new species of Provannid Snail from the Northwest Eifuku volcano.

The Provannidae are a group of highly specialised Gastropods found only on hydrothermal vent ecosystems. Together with the Abyssochrysidae (also restricted to deep-sea ecosystems) they form the Superfamily Abyssochrysoidea. The Family Provannidae currently comprises the genera Alviniconcha and Ifremeria, which live on hydrothermal vents and are hosts to endosymbiotic chemosynthetic Bacteria, and  Provanna and Desbruyeresia, which live on hydrothermal vents but live a conventional Gastropod grazing lifestyle. The Abyssochrysidae comprises two genera, Abyssochrysos, which is found on the deep ocean floor away from hydrothermal vents, and Cordesia, which is found on organic falls (the bodies of large organisms such as Whales that have sunk to the deep ocean floor). A seventh genus, Rubyspira, is also found on organic falls, but has not been assigned to either family. However, this taxonomic system has recently been challenged by studies that have applied genetic analysis to the systematics of the group, which have suggested that the Provannidae is in fact polyphyletic, with both genera assigned to the Abyssochrysidae nested within it.

The new species is assigned to the genus Provanna, and given the specific name exquisita, meaning 'exquisite'. The species is described from four specimens collected by the remote operated vehicles JASON II and Roger Revelle in 2014. The specimens were collected from the Golden Lips site, about 40 m away from the volcano's Champagne Vent, at a depth of 1606 m.

Provanna exquisita is a large Provannid Snail with a teleoconch (adult shell) reaching over 13 mm in length (over 15 mm if the spire is intact, but this is rare). The shell is thin, translucent, and fragile, but strengthened by three sharply raised, flange-like keels (one of these keels is missing in some individuals, but at least two are always present). The whorls of the shell are convex, and highly inflated, with axial ribs, weaker than the ridges, running suture to suture. The shells have an oval operculum (lid), and are  covered by a golden-brown periostracum (skin). 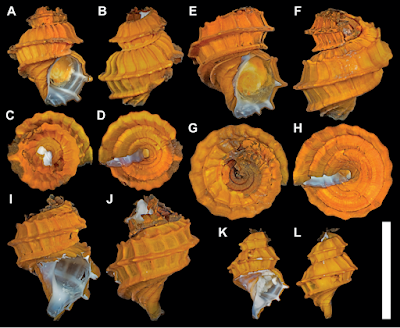 A genetic analysis carried out by Chen and Watanabe found that Provanna exquisita grouped with other members of the genus Provanna, confirming their analysis, but again that the two genera assigned to the Abyssochrysidae, while maintaining a sister-group relationship with one-another, appear to lie within the Provannidae, challenging the validity of that group as currently interpreted. 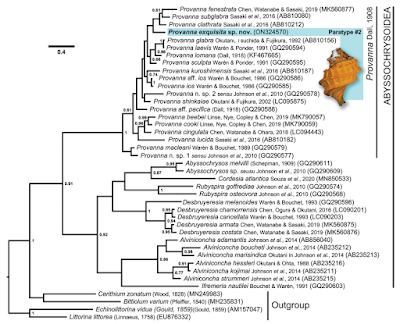