Looted artefacts returned to Cambodia by the US.

The United States has formally handed back 30 looted artefacts to Cambodia in a ceremony in New York on Monday 8 August 2022. The artefacts, which were looted during civil conflicts within the country which lasted from the 1960s to the 1990s, include a 10th century statue of the Hindu god Skanda riding a Peacock, and a four ton statue of the god Ganesaha, which was too large to bring to the ceremony, both looted from the ancient Khmer capital Koh Ker, and other sculptures dating from as far back as the Bronze Age. 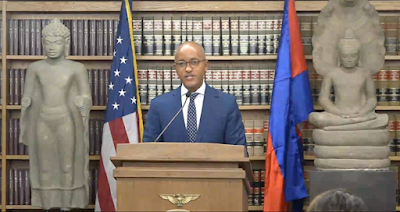 Damian Williams, US Attorney for the Southern District of New York, stands between two sandstone Bhudas during a ceremony in which these, and other looted artefacts, were returned to the Kingdom of Cambodia, on Monday 8 August 2022. International Consortium of Concerned Journalists.

The artefacts were smuggled into the US by Douglas Latchford, a British-born, Bangkok-based antiquities dealer who had been under investigation by the United States Department of Homeland Security Investigations from 2019 until the time of his death in August 2020. They were in the collections of a number of museums and individuals, all of whom chose to surrender the objects voluntarily after being served with civil forfeiture claims. 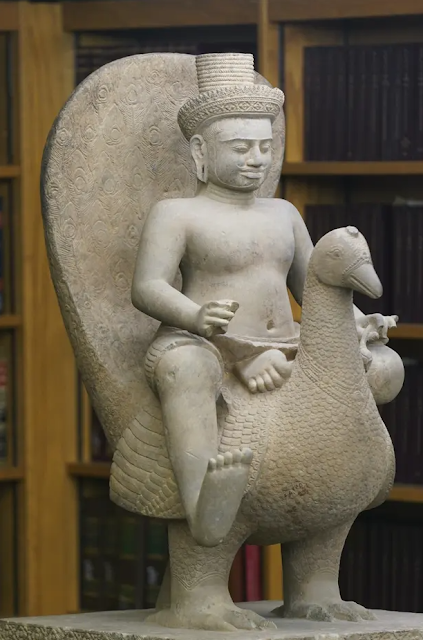 A tenth century sandstone statue of the Hindu war god Skanda riding a Peacock, looted from the Khmer capitol of Koh Ker and officially handed back to the Kingdom of Cambodia by the US Government this week. Seth Wenig/AP.

Latchford is believed to have obtained antiquities in Bangkok from an organised network of smugglers who dealt in items looted from archaeological sites and temples with Cambodia. In Thailand Latchfod is alleged to have forged documents of provenance for the artefacts, allowing them to be sold on the international market. However, the network was exposed as part of the 'Pandora Papers' investigation by the International Consortium of Investigative Journalists, which exposed numerous offshore banking and illegal trade networks involving high ranking politicians and wealthy individuals around the world. 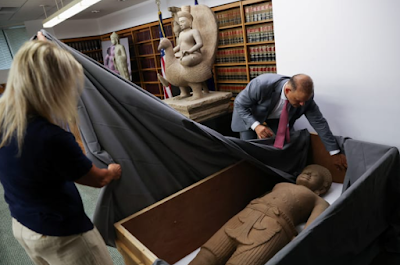 A tenth century sandstone statue returned to the Kingdom of Cambodia by the US Government this week after being looted and traded on the international black market. Andrew Kelly/Reuters.

As well as being of great historic and artistic value, many of the looted objects are considered to be sacred by the people of Cambodia. Once returned, they will be displayed in the National Museum of Cambodia in Phnom Penh.