Earthquake off the coast of County Mayo, Ireland.

On Wednesday 6 June 2012, slightly before 9 am local time (slightly before 8 am, GMT), an Earthquake occurred about 60 km off the west coast of County Mayo, Ireland (about 120 km northwest of Castlebar). This was recorded by the British Geological Survey as measuring 4.0 on the Richter Scale and occurring at a depth of about 3 km. A quake this small is unlikely to have caused any damage or casualties, but the quake was felt was felt in the counties of Mayo, Sligo and Galway. 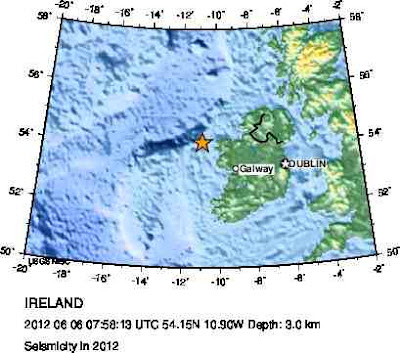 
Earthquakes in Ireland are extremely rare, making the causes of quakes hard to calculate. On Great Britain (the Island on which London, Cardiff and Edinburgh sit, rather than they country they are in; political boundaries have never been demonstrated to have any influence on seismicity), Earthquakes become more common the further north and west you travel, but no such rule of thumb applies in Ireland, and quakes in the Irish west coast are almost completely unheard of. The last 'major' Earthquake in Ireland occurred in 1984, measuring 5.4 on the Richter Scale, but this was in the Irish Sea, closer to the (more Earthquake-prone) UK. The country is subject to stress from the expansion of the Atlantic Ocean, and to a lesser extent from the northward movement of Africa into the south of Europe. Some tectonic stress due to glacial rebound probably also occurs (parts of northwest European crust were pushed down into the Earth's mantle by the weight of hundreds of meters of ice till about 10 000 years ago, and are still slowly rebounding), but this would be unlikely to account for such a large quake so far offshore. 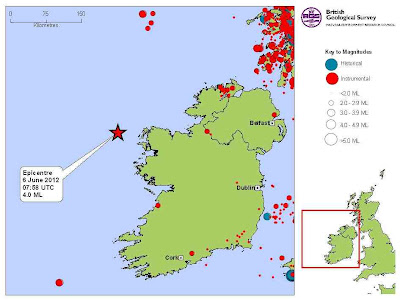 Map showing the location of instrumentally recorded quakes in Ireland (red) as well as pre-instrumental quakes large enough to have been documented. Note the much higher density of quakes in Scotland (top right). BGS.