The peculiar planets of Kepler-36.

The Kepler Space Telescope has been staring constantly at the same part of the Galaxy for over three years, looking for the tell-tale dimming and wobbling of stars that reveals the presence of planets around them. During this time it has discovered a number of remarkable planetary systems that have revolutionized our thinking on how such systems form and evolve.


In a paper published on the online arXiv database at Cornell University Library on 20 June 2012, and in the journal Science on 21 June 2012, a team of scientists led by Joshua Carter of the Harvard-Smithsonian Center for Astrophysics announce the discovery of a new, and rather remarkable, planetary system named as Kepler-36.


The system's star, Kepler-36A, is an essentially sun-like star that has reached the subgiant stage of its life; it is coming to the end of its hydrogen supply and starting to fuse helium. This generates more heat than hydrogen, causing the star to expand. Kepler-36A has 1.071 times the mass of the Sun, and an effective surface temperature of 5911 K (compared to 5778 K for our Sun).

The orbits of these two planets are remarkably close together, closer than any pair of planets previously discovered, separated by just 0.013 AU (1.945 milion km), so that at their closest the two planets are only five times as far apart as the Earth and the Moon, at which distance Kepler-36c would be 2.5 times as large in the sky of Kepler-36b as the full moon is in the sky of Earth. 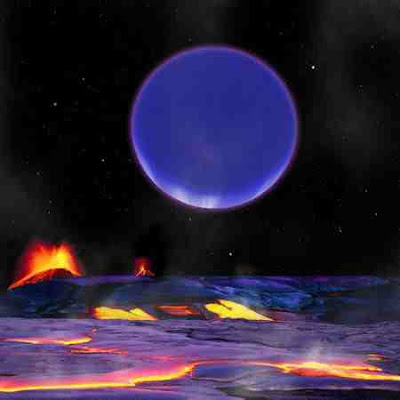 An artist's impression of how Kepler-36c would appear from Kepler-36c at the closest point in the two planets' orbits. Harvard-Smithsonian Center for Astrophysics/David Aguilar.

As well as being remarkably close, the two planets are remarkably different in composition. In our Solar System there is a clear differentiation between rocky and gaseous planets, with the former confined to the inner part of the system and the later to the outer parts. This is thought to be a result of the way in which the Solar System formed, with volatile gasses largely driven out of the inner system by the heat of the early Sun. Since we have begun studying other planetary systems, we have come to understand that this is not always the case, with many systems having large gaseous planets close to their stars. Scientists believe such planets are likely to have formed further out in their systems, then migrated inwards as friction with material in the protoplanetary disks slowed them down in their orbits. However this is the first time we have seen a rocky and a gaseous planet in such close proximity, and modeling the formation of the Kepler-36 system is difficult based upon our current understanding of the formation of planetary systems.