Braconid Wasps are parasitoid Wasps (i.e. Wasps whose larvae mature inside the living bodies of other insects, which generally die as a result) related to the more familiar Ichneumon Wasps, but much smaller. They have a formidable appearance, but are in fact stingless, making them harmless to non-host species. There are about 150 000 known species found across the globe.

In a paper published in the journal Zookeys on 21 May 2012, Lidia Sulca of the Natural History Museum at the University of San Marcos and Michael Sharkey of the Department of Entomology at the University of Kentucky describe three new species of Braconid Wasp from Peru.

The first of these species is Sesioctonus huggerti, Huggert's Wasp, named in honor of the late Swedish entomologist Lars Huggert, who collected the single known specimen from Puerto Maldonado in southern Peru in 1984. It is a 5 mm black wasp with yellow markings on the thorax and abdomen.

The second new species is named Sesioctonus wayquecha, the Wayquecha Wasp, after the locality where it was discovered (Presumably the Wayqecha Cloud Forest Biological Station, though this isn't specified). It is a 4.3-5.5 mm black wasp with yellowish mouthparts, limbs and mid-body. 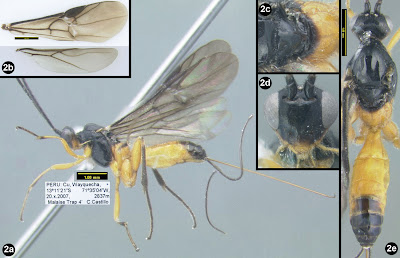 The third new species is Sesioctonus bina, 'bina' meaning 'wasp' in Shipibo, a language of the Peruvian Amazon. This is described from a single, female, specimen from San Pedro in the Cusco Region. It is a 3.35 mm black and orange wasp. 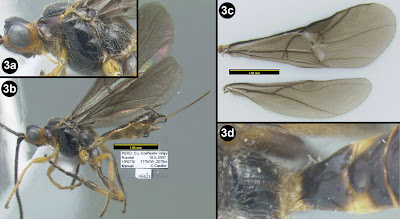