On Monday 11 June 2012, slightly after 9.30 am local time (slightly after 5.0 am GMT) an Earthquake struck the Afghan province of Baghlan, about 40 km east of the provincial capitol, Pol-i-Khomri, at a depth of about 15 km, according to the United States Geological Survey, who recorded the quake as measuring 5.4 on the Richter Scale. This was followed by a second quake in almost exactly the same place, slightly before 10 am local time (5.30 GMT), this time measured by the USGS as 5.7 on the Richter Scale. 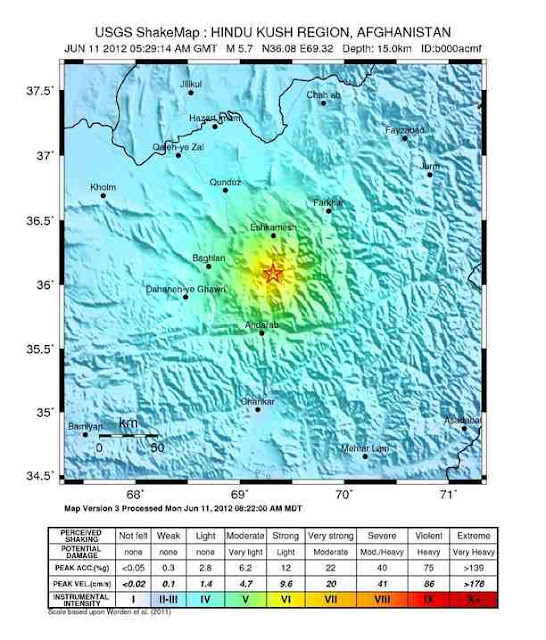 Map showing the center of the quake (star) and the areas that suffered the most severe shaking. USGS.

The area where the quake occurred is very remote and mountainous, so the situation on the ground is far from clear, but the quake apparently led to a landslide which buried up to 30 buildings, containing a large number of people. The death toll at this time is uncertain, but it is feared that it may reach dozens or even hundreds.

Afghanistan lies on the Eurasian Plate, close to its boundary with the Indian Plate, which runs through neighboring Pakistan. The Indian Plate is moving northward, pushing into the Eurasian from the south. Since both plates are continental neither subducts readily, so the collision between them has resulted in crumpling of the plates and uplift along the margin, creating the Himalayas, the Hindu Kush, the Tibetan Plateaux, and the mountains of Central Asia. This is not a smooth process, and Earthquakes are common throughout these areas.