About 15 minutes after midnight on Friday 15 June 2012, local time (4.15 pm on Thursday 14 June, GMT), an Earthquake struck eastern Taiwan. This was recorded by the United States Geological Survey as occurring at a depth of 5.9 km, 28 km to the south of the city of Hualien, and as measuring 5.2 on the Richter Scale. The quake was apparently felt across much of the island, but there are no reports of any damage or casualties; Taiwan is an extremely Earthquake prone country, and consequently well prepared for such events. 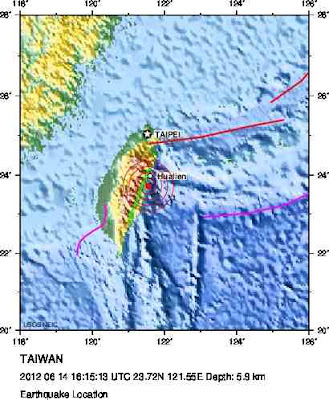 Map showing the location of the 15 June Earthquake. USGS. 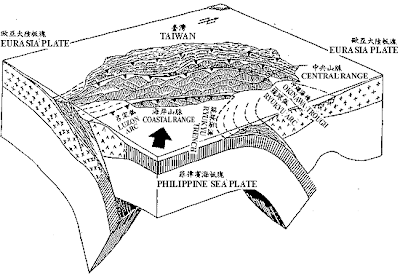 Rough diagram of the tectonic margins beneath Taiwan. Angelier (1986).