On Sunday 24 June 2012, at 4.15 pm local time (3.15 am GMT) the east coast of the Kamchatka Peninisula in the Russian Far East was shaken by an Earthquake measured by the United States Geological Survey as measuring 6.1 on the Richter Scale and occurring roughly 150 km north of the fishing port of Ust-Kamchatsk at a depth of 17.4 km. Such a large quake at such a shallow depth has the potential to cause considerable damage, but the remoteness of the location means this one is unlikely to have caused anyone serious harm. 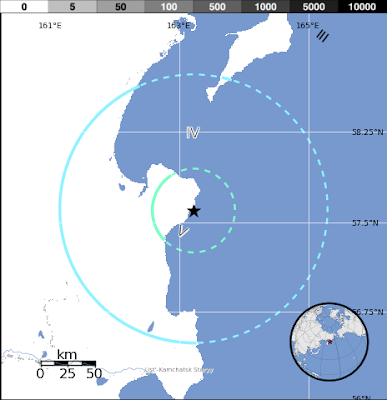 Map showing the location of the 24 June quake. USGS.


The Kamchatka Peninsula is (mostly) located on the northeastern part of the Okhotsk Plate, which also underlies the northern part of Japan and part of the Russian state of Magadan. This is bounded to the east by the Pacific and Bering Sea Plates, both of which are being subducted beneath the Kamchatka Peninsula, which is in effect an island arc attached to the mainland. As the plates are subducted they are  partially melted by the friction and the heat of the Earth's interior, forming liquid magma which then rises up through the overlying Okhotsk Plate, feeding the volcanoes of the Kamchatka Peninsula. The subduction is not a smooth process, the plates stick together for periods causing build-ups of pressure. They then break apart in sudden movements causing Earthquakes such at this one. 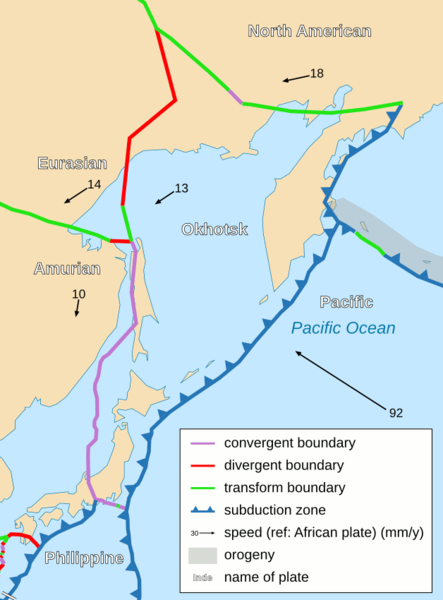 Map showing the Okhotsk Plate and the tectonic plates surrounding it. Wikipedia.

There are 160 volcanoes on the Kamchatka Peninsula, 29 of which are active, including Klyuchevskaya Sopka, the highest active volcano in Eurasia at 4750 m. These were made a UNESCO World Heritage Site in 1996, in recognition of the areas outstanding geological and biological uniqueness. 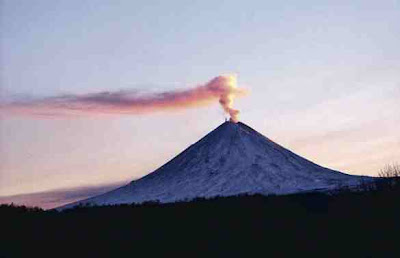 A volcanic plume rises above Kluchevskaya Sopka. The Moscow Times.