Giant Bumphead Parrotfish (Bolbometopon muricatum) are the largest species of Parrotfish, and indeed the largest non-carnivorous fish of any description inhabiting modern coral reefs, reaching 150 cm in length and 75 kg in weight. They have a major impact on the ecology of reefs, with individuals bioeroding up to 5 tonnes of coral per year; where the fish are removed reefs become vulnerable to infestation by algae and Sea Urchins. Like many large marine animals they are extremely vulnerable to over-exploitation by humans, particularly due to their highly territorial nature and habit of sleeping close to the surface in large shoals, which makes them easy prey to spear-fishermen armed with torches. This has lead to the fish being listed as vulnerable on the International Union for Conservation of Nature’s Red List. 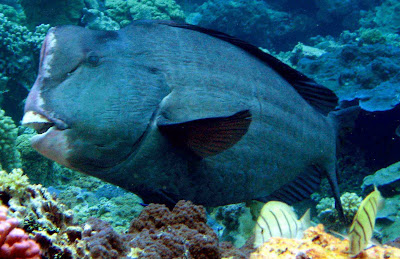 This over-exploitation, and the accompanying wariness of humans that the fish have developed, has led to us having a far poorer understanding of the behaviour of Giant Bumphead Parrotfish than might otherwise be expected of such a large and obviously important member of the reef community. Males are known to hold territories on reefs, and to mate with all the females feeding in these territories, typically forming shoals of 30-50 individuals, but how territories are established and defended has been unclear.

In a paper published in the journal PLoS One on 6 June 2012, a team of scientists led by Roldan Muñoz of the National Marine Fisheries Service at Beaufort Laboratory, part of the National Oceanic and Atmospheric Administration, present the results of a study of the behaviour of Giant Bumphead Parrotfish at Wake Atoll, a U. S. Marine National Monument and National Wildlife Refuge, co-managed by the U. S. Department of Defense and the U. S. Fish and Wildlife Service; a site where the fish have never been targeted by humans and were indifferent to the presence of divers.

At Wake Atoll male Giant Bumphead Parrotfish were found to engage in frequent bouts of aggressive behaviour. This would start with bouts of parallel swimming, then, if this did not resolve things, the males would engage in violent head-butting, in a manor similar to that observed in deer and antelopes. The fish show sexual dimorphism, with larger, bonier, bumps on the heads of the males than on the females. This is the first time such behaviour has been witnessed in a marine fish; it has previously been observed in some freshwater species, notably cyprinid minnows and elephantfish, but none of these have specialist adaptations to this behaviour like the bumps of the Giant Parrotfish.

See also Satellite tracking Manta Rays off the coast of Mexico, Head injury in a pachycephalosaur, New species of Parrotfish from the East Atlantic, Head-butting in a Pachycephalosaur and Boney Fish on Sciency Thoughts YouTube.