New species of Sleeper Gobie from the Early Miocene of Otago, New Zealand

Sleeper Gobies, or Eleotrids, are (mostly) freshwater fish with a planktonic, marine, larval stage, related to the True Gobies. They are most abundant in the Indo-Pacific region, where they form an important part of freshwater ecosystems on islands such as Hawaii and New Zealand.


In a paper published in the journal Acta Palaeontologica Polonica on 31 March 2011, a team of scientists led by Werner Schwarzhans, an independent researcher from Hamburg, describe a new species of Sleeper Goby from the Early Miocene (19-16 million years ago) lacustrine Bannockburn Formation of Central Otago, New Zealand. The Bannockburn Formation forms the uppermost part of the Manuherikia Group, which were laid down in an ancient lake, also called Manuherikia, which covered an area of about 5600 km², slightly smaller than the modern Lake Victoria, and considerably larger than any lake in modern New Zealand. 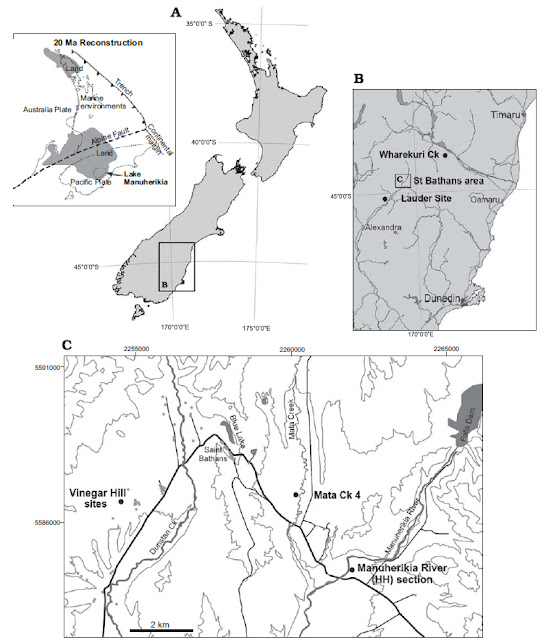 The location of the Bannockburn Formation. Schwarzhans et al. (2012).


The new fish is described from a complete skeleton from a (broken) limestone nodule, plus a disarticulated skull, preserved in limestone nodules. Both of these contained the otoliths, bones of the inner ear which are more readily preserved than other parts of the fish skeleton, and which palaeontologists are able to use to identify fish in the absence of other preserved remains. It is named as Mataichthys bictenatus, meaning the Mata-fish with bictenate scales; the fish was located in the Mata Creek exposure, and Mata is a Maori name which can mean a rock or a container filled with fish, amongst other things. 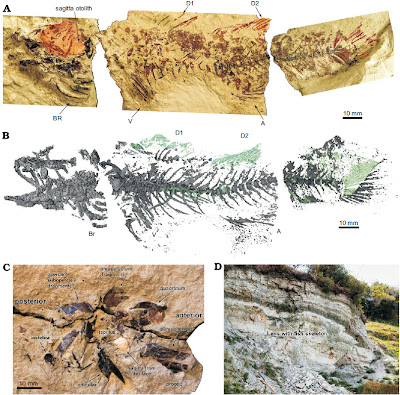