A Brittle Star from the Late Jurassic of Southern Germany.

Brittle Stars (Ophiuroids) are Echinoderms superficially resembling Starfish, with five arms arranged radially around a central hub that contains the mouth and other organs, but structurally somewhat different. The arms of Starfish are essentially rigid, with the animal relying on tube feet on its underside to move it about. In Brittle Stars the arms are articulated and used for locomotion, the tube feet are still present, but used primarily for food gathering. The group have a long fossil record, first appearing in the Early Ordovician about 500 million years ago,  but they are seldom abundant in the fossil record, probably because their remains are easily disarticulated (brittle) and therefore do not enter the fossil record in large numbers. Most modern Brittle Stars are deepwater dwellers, but in the past shallow water forms appear to have been more common.


In a forthcoming paper in the journal Acta Palaeontologica Polonica, Ben Thuy of the Department of Geobiology at the Geoscience Institute at the University of Göttingen and Hartmut Schulz of the Paleobiology Work Group at the Department of Geosciences at the University of Tübingen redescribe a Brittle Star from the Late Jurassic of Steinenfeld in southern Germany, first described by the nineteenth century German Palaeontologist Friedrich August von Quenstedt in 1876.

Quenstedt originally described the Brittle Star under the name Ophiurites crinitus, however the genus name Ophiurites is now considered invalid, so Thuy and Schulz place it in the new genus Ophiosternle, from 'stern' the Swabian (southern German) for 'star'. It shows close affinities to a number of modern, deepwater Brittle Stars, but the deposits in which it was discovered are interpreted as having originated on a shallow, storm disturbed, coral reef, suggesting that the move into deepwater has happened since the Jurassic. There are a number of other known Brittle Star fossils from the Late Jurassic of southern Germany and France, most of which are from fine-grained mudstones (i.e. low energy environments). Brittle Stars may have been an abundant part of the fauna of Jurassic reefs, but their poor preservational potential in this environment would hide this from us. 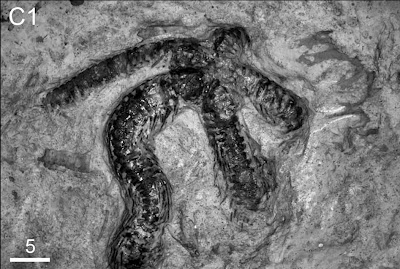