Robber Frogs of the genus Diasporus are found from eastern Honduras through Panama to the forests of Columbia and coastal Ecuador. They undergo direct development, skipping the tadpole stage, with eggs typically laid in Bromeliads.


In a paper published in the journal Zookeys on 21 May 2012, a team of scientists led by Andreas Hertz of the Senckenberg Forschungsinstitut und Naturmuseum and the Institute for Ecology, Evolution and Diversity at Johann Wolfgang Goethe-University, describe a new species of Robber Frog from the Cordillera Central of western Panama.

The new species is named Diasporus citrinobapheus, the 'yellow-dyer' since it is bright yellow and that colour came off and stained the fingers of researchers handling the Frogs; this has been seen in members of the genus Diasporus before, but not to the extent seen in D. citrinobapheus. 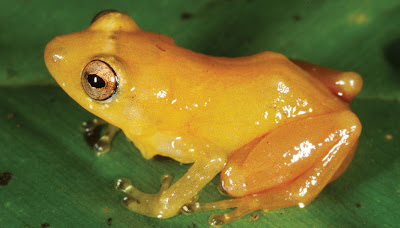 Diasporus citrinobapheus is an 18 mm bright yellow Frog, wide in the head for a Robber Frog. Some specimens have white or greyish-white spots. It was found at a number of widespread locations in the Cordillera Central of Panama, suggesting it is fairly common. Hertz et al. carried out mitochondrial rRNA analysis, which confirmed it was a distinct species. They also recorded the call of the male Frog as part of their formal description, though this data does not exist for many other Frogs in the same genus, preventing meaningful comparison. 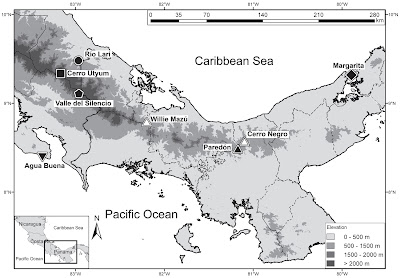