A new study of the Kepler 11 planetary system.

The Kepler 11 system was the eleventh planetary system discovered by the Kepler Space Telescope; its discovery being announced in a paper in the journal Nature in February 2011. The star (Kepler 11A) is a G-type star with 95% of our Sun's mass approximately 2000 light years from Earth in the constellation Cygnus. This is surrounded by a system of 6 known transiting planets (i.e. planets which pass across the face of the star when seen from Earth), all of which orbit closer to the Star than Venus does to our Sun. 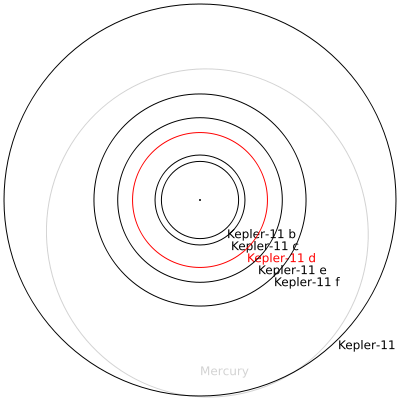 The orbits of the planets of the Kepler 11 System, with the orbit of Mercury given for scale. The Visual Exoplanet Catalogue.

In a paper published on the arXiv database at Cornell University Library on 3 May 2012, and also due to be published in the Monthly Notices of the Royal Astronomical Society, Cezary Migaszewski, Mariusz Słonina and Krzysztof Gózdziewski of the Torún Centre for Astronomy at Nicolaus Copernicus University present the results of a longer term study of the Kepler 11 system, updating our understanding of its planets. This includes revised measurements of the masses and orbital parameters of the planets, plus some analysis of the atmospheres of those planets, made by spectrographic analysis as those planets passed in front of the star.

Kepler 11b is the innermost of the planets; orbiting at a distance of 0.091 AU (i.e. 9.1% of the distance between the Earth and the Sun) every 10.3 days. It has a mass between 1.0 and 6.6 times that of the Earth, and appears to be quite dense, containing a high proportion of heavy elements; this is not surprising, a planet this close to its parent star would be expected to lose lighter elements to evaporation (although it should be noted that Kepler 11b still appears to be less dense than the Earth).

Kepler 11c is the next planet from the star, orbiting at 0.106 AU every 13 days. It has a mass between 1.5 and 13.0 times that of the Earth. It appears to have a density similar to that of Uranus or Neptune, which is surprising as these planets lie in the cool, outer reaches of our Solar system. Kepler 11 is slightly cooler than our Sun, with an effective surface temperature of 5680 K (compared to 5778 K for the Sun), but not enough so for Ice Giant type planets to exist this far in in the system. It is likely to be comprised of heavier elements than Uranus or Neptune, with these elements in a less dense state due to the extreme heat from the star.

Kepler 11g orbits at 0.462 AU (the only known planet in the Kepler 11 system with an orbital distance greater than that of Mercury. It is the least well constrained of the planets with a mass less than 42 times that of the Earth (probably less than 28 times), and may be less dense than Saturn or Jupiter.