A new Ground Sloth from the Late Miocene of Argentina.

Ground Sloths (Megatheridae) were large, robust, ground-dwelling herbivores related to the extant Tree Sloths. They first appeared in South America about 23 million years ago, and spread to North America over the Panama Land Bridge about 2.2 million years ago. The went extinct abruptly at the end of the Pleistocene about 11 000 years ago; just as human beings were colonizing the Americas. 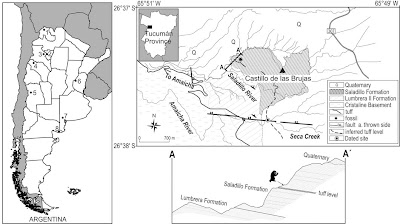 The new specimen is described from a mandible (jawbone) and partial digit only. It is placed in the genus Anisodontherium on the basis of the mandible (Anisodontherium has narrower jaws and teeth than any similar species of Ground Sloth) but no attempt at species level classification is made, due to the limited nature of the available material.

To date only three species of Ground Sloth have been described from the Late Miocene-Early Pliocene of northwest Argentina, all of which have been placed within the genus Pyramiodontherium. Even though this new specimen is not complete enough to allow for a full classification, which leaves the possibility of future reclassification very much open, it clearly does not belong to an of these previously described species, indicating a more diverse Sloth population in the area at that time than has previously  been understood.

See also The origin of domestic dogs, Three new species of Tapir from the Early Eocene of Pakistan, Genetic diversity in Grey Whales, The Dwarf Pachyderms of Crete, Mammoths or Straight-Tusked Elephants? and Mammals on Sciency Thoughts YouTube.