Manam Motu is a volcanic island 13 km off the north coast of Papua New Guinea; it is essentially a submarine stratovolcano (cone-shaped volcano) with its tip sticking above the sea, forming a 10 km diameter circular island with the summit of the volcano at the centre. The island is remarkably symmetrical, with four valleys at 90° angles leading from the summit to the sea, which carry ejecta from the frequent eruptions. 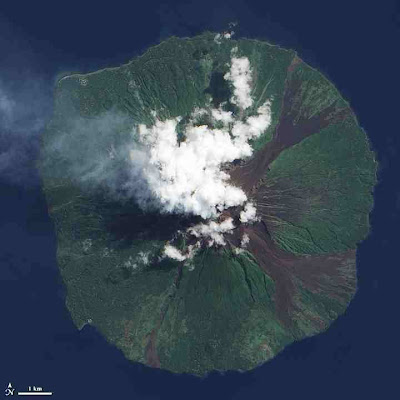 
The Rabaul Volcano Observatory in Papua New Guinea reported the appearance of a vapor cloud above Manam Motu on 5-6 May 2012, followed by an ash cloud on 6-7 May, combined with incandescence (glowing) over the summit. On the 10-11 another ash cloud was observed, accompanied by further incandescence. Incandescence resumed on 13-14 May, with further ash eruptions on the 13th. On 16 May a darker grey/black ash cloud was produced, accompanied by an increase in ejected incandescent tephra (tephra is any material ejected from a volcano, it can be ash, rock fragments or lava; this is a particularly useful term when volcanologists don't want to get close enough to inspect the ejected material). Another ash cloud was produced on 26 May, followed by a Strombolian eruption (eruption of incandescent tephra and lava bombs) on the 27th. This was followed by more further ash clouds on the 28th and 29th, and another Strombolian eruption on the 30th.

Manam Motu is one of Papua New Guinea's most active volcanoes; it underwent four eruptive cycles in 2011. The island was inhabited until 2004, when the island's population of ~9000 was evacuated after an eruption killed five people. The Papuan government allowed re-settlement to begin in March 2007, but three people were killed on the island within a month; the island's inhabitance status is currently unclear. Prior to 2004 the most recent fatalities had been in 1996, when a pyroclastic flow (avalanche of hot ash and poisonous gas) hit the village of Budua, killing 13.

Despite its small size and inhospitable nature Manam Motu was apparently settled for a long time, having developed its own distinctive language (Manam).