A new species of Scallop from Western Australia.

Scallops of the genus Pecten are distributed more-or-less globally in temperate waters, and are very well studied as they are important commercial species. Tropical members of the genus are less common, and less well understood, with species having low abundances and deeper habitats, making them less attractive commercially and harder to study.


In a paper published in the journal Molluscan Research on 30 March 2012, Peter Duncan of the Faculty of Science, Health and Education at the University of the Sunshine Coast and the School of Ocean Sciences at Bangor University, and independent researcher Gary Wilson, describe a new species of Scallop from the north coast of Western Australia.

The new species is named as Pecten dijkstrai, in honor of Henk Dijkstra, an expert on Australian Scallops. It is named from specimens collected from two sites off the north coast of Western Australia, roughly 200 km apart. The first of these sites being off the coast of Gnaraloo, the other in the Exmouth Gulf. Both sites were situated at depths of about 40 m. 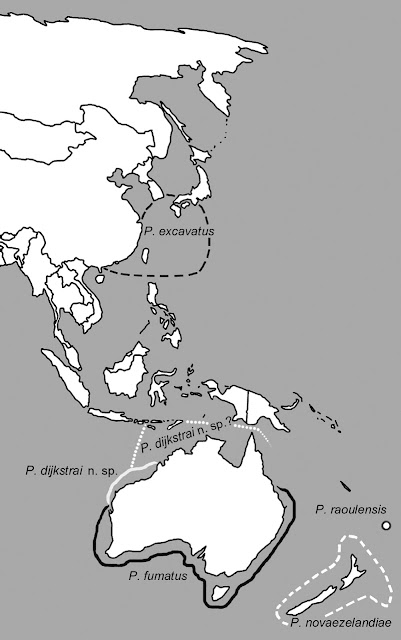 P. djikstrai is a medium sized Scallop with a shell roughly 43 × 48 mm; it is deeply convex, and shells can reach 55 mm thick (unusual in a Scallop). It has 14-16 prominent radial ribs, and is an off-white colour, with extensive pink-to-dark-pink markings and (sometimes) black or white chevrons. 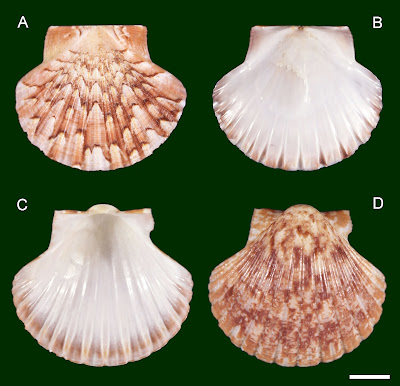 Duncan and Wilson suspect that P. djikstrai may be present along much of the north coast of Australia, and may also be present in Indonesia, where Scallops are known to exist, that have previously been attributed to an East Asian species, P. excavatus, which is not found close to, or in a similar climate to, the Indonesian locations.

See also News species of Velvetfish from the Kimberly Coast of Western Australia, The Snail that eats Crabs and Drilling for oil on the Ningaloo Reef.