The Hungarian-made Automated Telescope South project (HATSouth) is a network of six robotic telescopes located at three separate sites in the Southern Hemisphere, the Las Campanas Observatory in Chile, the High Energy Stereoscopic System site in Namibia and Siding Spring Observatory in New South Wales, designed to search for exoplanets in the southern sky. It is run as a collaborative project by the Max Planck Institute for Astronomy, Harvard-Smithsonian Center for Astrophysics, Princeton University, the Australian National University, and the Pontificia Universidad Catolica de Chile. 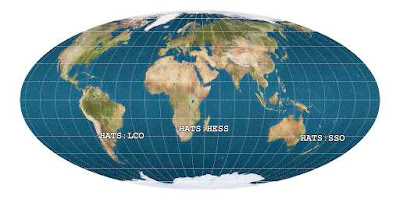 In a paper published in the online arXiv database at Cornell University Library on 8 June 2012, a team of scientists led by Kaloyan Penev of the Department of Astrophysical Sciences at Princeton University and the Harvard-Smithsonian Center for Astrophysics describe the first planet discovered by the HATSouth network. 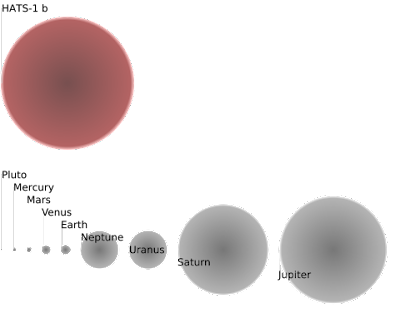 The comparative sizes of HAT-1b and the planets of our Solar System. The Visual Exoplanet Catalogue.

Large planets close to their stars are the easiest to detect; their gravity exerts more influence on the star than smaller, more distant planets, causing the stars to wobble more pronouncedly, and those that transit their stars (such as HATS-1b) do so more often and obscure more of the star's light. It is unsurprising, therefore, that the first planet discovered by the HATSouth survey should be a Hot Jupiter type planet (though this is still no mean achievement). The discovery does, however, prove that the system is working, so more discoveries from HATSouth are to be expected.

See also The object orbiting GD66 is probably a planet, not a Brown Dwarf, Looking for HD 97658b, The atmosphere of WASP-24b, Silicate snow on HD 189733 and Exoplanets on Sciency Thoughts YouTube.