A new species of Giant Side-Necked Turtle from the Palaeocene of Columbia.

In a paper in the June 2012 edition of the Journal of Systematic Palaeontology, a team of scientists led by Edwin Cadena of the Department of Marine, Earth and Atmospheric Sciences at North Carolina State University, the Florida Museum of Natural History at the University of Florida and the Smithsonian Tropical Research Institute describe a new species of Palaeocene African Side-Necked Turtle from the Cerrejón Coal Mine in Columbia.

Map showing the location of the Cerrejón Mine. Cadena et al. (2012).

The new species is named as Carbonemys cofrinii, Cofrin's Coal Turtle, in honor of the late David Cofrin, a Floridan philanthropist noted for his support for the arts, education, nature preservation and community development.

It is described from an isolated skull, 21 cm in length by 13 cm wide, from the 58-55 million year old, Upper Palaeocene Cerrejón Formation at the Cerrejón Mine. 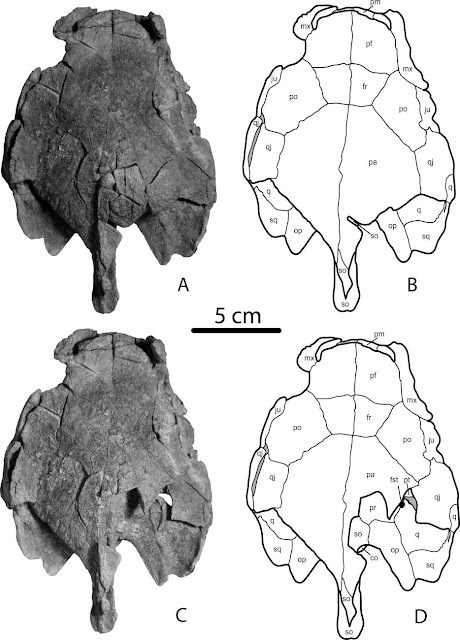 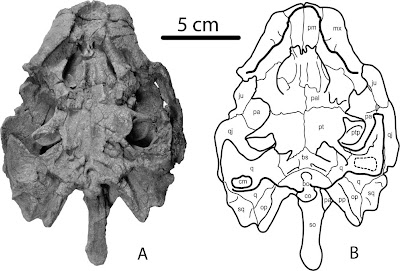 Cadena et al. also describe two further Side-Necked Turtle finds from the same deposits. The first of these, described as Taxon A, is the nearly complete shell of a Turtle, 173 cm in length. This is the right sort of size to be the same species as Carbonemys cofrinii, but it is clearly a different specimen, and Cadena et al. decided not to assign it to the species without direct evidence. Whatever the case there were clearly large (~2 m) Side-Necked Turtles living in Northern Columbia during the Late Palaeocene, comparable with the largest Side-Necked Turtle ever known, Stupendemys geographicus (shell length 1.8 m), from the Miocene Venezuala, and the largest known Palaeocene Turtle of any description. 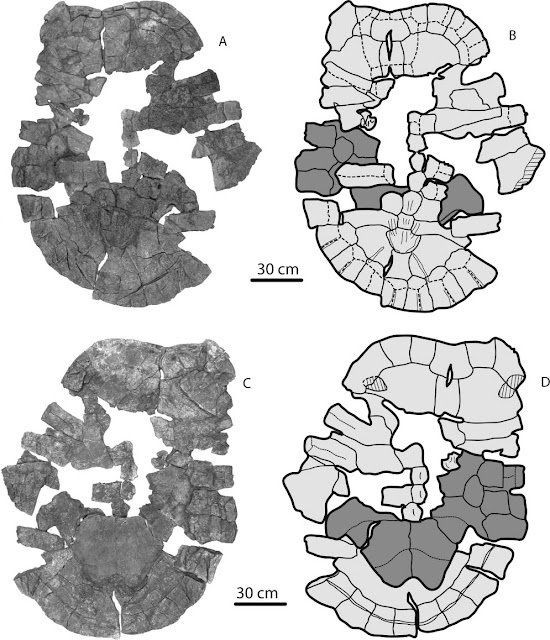 The second undescribed Side-Necked Turtle is a group of four shells, about 20 cm in length, which are not formally described as they lack skulls, considered the by Cadena et al. the most important feature for classification purposes. One of these shows sign of having been bitten by a crocodile. 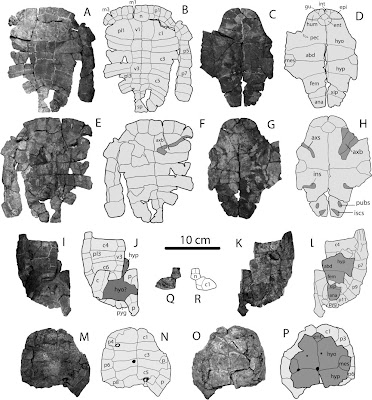 See also A new fossil bird from the Palaeocene of Brazil and Reptiles on Sciency Thoughts YouTube.